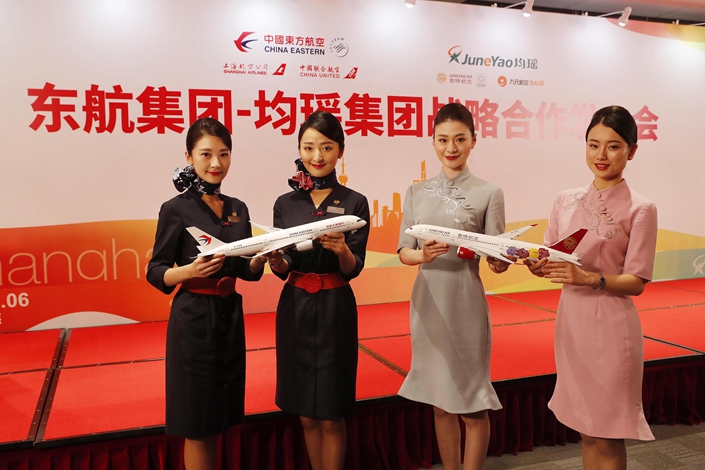 Under the tie-up, the privately-owned Juneyao Airlines now holds about 10% of China Eastern Airlines. Photo: VCG

Two leading Shanghai-based airlines have completed their formation of a strategic alliance, including an equity tie-up, creating a dominant force in the nation’s financial hub.

China Eastern Airlines Corp. Ltd. and Juneyao Airlines Co. Ltd. first announced their plans to form the alliance last year, and since then each has taken a major stake in the other. The privately-owned Juneyao now holds about 10% of China Eastern, one of three major state-run airlines that formed during the early reform era from the breakup of China’s former aviation authority.

The tie-up marks the latest between a major state-owned firm and one from the private sector, part of a broader “mixed ownership” reform program that Beijing is promoting as a way to bring more innovation into the slower-moving state sector. China Eastern formed another such tie-up in 2017 when four outside investors bought stakes in its cargo unit, which is now aiming to make a separate listing in Shanghai.

“The strategic cooperation is of key strategic significance in promoting the construction of ‘Five Centers’ in Shanghai, establishing Shanghai as an international aviation hub and air transportation center as well as intensifying mixed ownership reform of state-owned enterprises and fostering the future sustainable development of both parties,” China Eastern said in its statement to the Hong Kong stock exchange.

The tie-up will create a clear market leader in Shanghai by combining China Eastern’s 46.3% of the market with Juneyao’s No. 3 position at 9.7%, said Lin Zhijie, an aviation expert based in the southern city of Xiamen.

“These two giants will combine to control nearly 60% of the market, which will greatly elevate market control of the Shanghai hub,” he said. “At the same time, both companies are full-service companies with similar models, similar markets … They can come together to make big money.”

As part of the alliance, the pair has formed a new joint venture capitalized at 800 million yuan ($112 million), according to the Juneyao announcement (link in Chinese). That firm will engage in various forms of investment in the aviation industry and Shanghai, and in ancillary areas like real estate and technology trade.