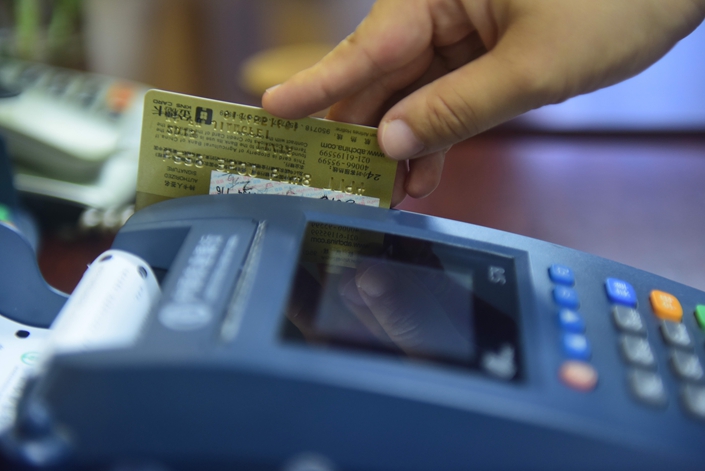 The value of credit card balance transfers facilitated by a leading industry player has dropped as both the credit card and online lending markets face downward pressure.

Balance transfers involve transferring debt, usually credit card debt, to another credit account, often at a personal finance company. In China, these accounts are usually run through online platforms, and unlike in the U.S., they tend to charge higher interest rates than those offered on banks’ credit cards. Xue Hongyan, an internet finance expert at the Suning Institute of Finance, told Caixin that they usually offer interest rates of 30% to 36%.

Chinese consumers undertake balance transfers for reasons other than the pursuit of lower interest rates. For example, they may prefer to pay off their debt in installments, but their bank doesn’t allow them to do so due to their poor credit histories. Or if their bank does allow installments, it may lower their credit limit in future, so they’ll transfer their balance to avoid that.

X Financial, one of the largest Chinese internet finance companies to offer balance transfers, reported that the value of loans facilitated by its balance transfer platform was 7.6 billion yuan ($1.1 billion) in the second quarter of 2019, down 23.2% year-on-year. The net revenue of the New York-listed company dropped 23.6% to 809.6 million yuan in the second quarter. The current share price is less than 30% of its IPO price in September 2018.

A major part of X Financial’s revenue comes from balance transfer fees that the company charges borrowers. In 2018, these fees amounted to nearly 3 billion yuan, accounting for 83.6% of its total net revenue.

The drop in balance transfers is likely connected to regulatory tightening in the credit card sector and online lending, amid increasing concerns about growth in borrowing taken on by individuals over the past few years and about more and more people borrowing new debt to repay old borrowing. As financial regulators have boosted oversight of the sector to prevent debt risks, the average growth rate of outstanding credit card loans at 12 major commercial banks was 7.02% from the end of December 2018 to the end of June, a decrease of 4.96 percentage points year-on-year, according to Caixin’s calculation.

A central bank report showed that outstanding credit loans of bank cards reached 7.2 trillion yuan at the end of the second quarter of 2019, up 3.6% from a quarter earlier.

Another company that provides balance transfer services, Hong Kong-listed Vcredit Holdings Ltd., said the value of its loans for credit card balance transfers rose 8.6% to 6.7 billion yuan in the first half of 2019, which only accounted for 46.3% of total loans it generated, down from 63.7% in the same period the previous year as its consumer credit business has expanded much faster.