By Wen Simin and Mo Yelin 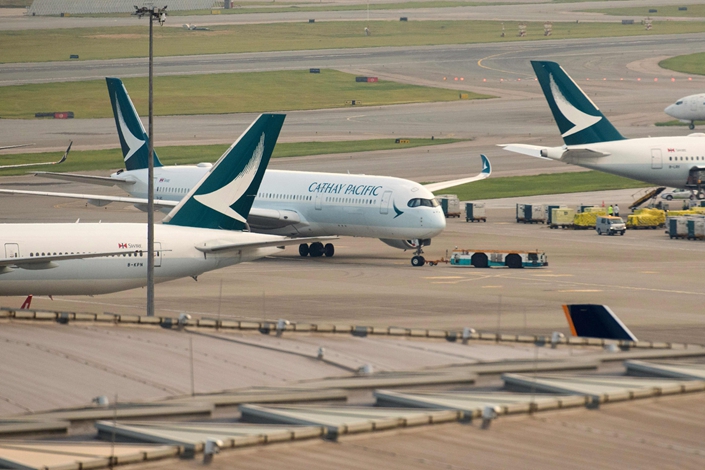 Hong Kong’s major airline, Cathay Pacific Airways Ltd., has reported its biggest monthly drop in passenger traffic in a decade, reflecting the impact of ongoing political turmoil in the city.

In August, Cathay Pacific — and its subsidiary Cathay Dragon — carried a combined total of 2.9 million passengers, a drop of 11.3% from the same month last year, the carrier said in a statement to Hong Kong Stock Exchange on Wednesday. This is its biggest monthly fall since mid-2009.

The result came as Hong Kong’s tourism industry has taken a hit from demonstrations that have caused more than 30 countries to issue travel warnings for the city. Protestors have occasionally massed in the international airport terminal since July, which has led to flight cancellations.

“August was an incredibly challenging month, both for Cathay Pacific and for Hong Kong,” said the airline’s chief customer and commercial officer, Ronald Lam.

“Overall tourist arrivals into the city were nearly half of what they usually are in what is normally a strong summer holiday month, and this has significantly affected the performance of our airlines.”

Cathay Pacific said that inbound traffic to the city from markets in the Chinese mainland and Northeast Asia had been particularly hard hit. Relative to leisure travel, demand for premium class travel suffered a more significant drop, the carrier said.

Cathay Pacific itself has been embroiled in the political turmoil. The Civil Aviation Administration of China, the mainland’s airline regulator, last month issued a notice to the company asking it to suspend staff who supported or took part in “illegal demonstrations, protests and violent attacks.”

Three senior Cathay Pacific executives have also announced their departures, the latest being John Slosar who said earlier this month he would resign and retire from his position as chairman of the company in November.

Cathay Pacific doesn’t see a turnaround coming any time soon and said it has made capacity realignments for the coming months.

It had previously set a target to grow capacity by more than 6% for the 2019 winter season between October and March 2020. It now says that target would be adjusted: capacity during the period would remain roughly the same as the 2018 winter season.