By Isabelle Li and Shi Wanshuang 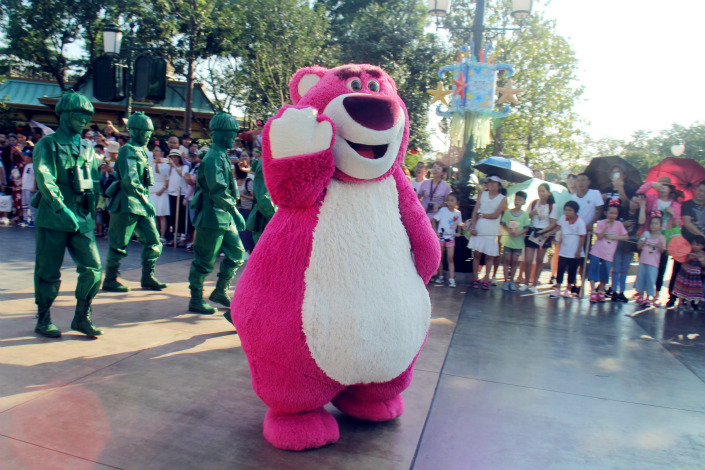 A parade at the Shanghai Disney park on Sept. 11. Photo: IC Photo

Global theme park giant Disneyland has given in to local complaints at its first resort on the Chinese mainland, significantly scaling back its ban on bringing in food from outside the park.

On Thursday, the district court in Shanghai’s Pudong New Area announced that Shanghai Disney Resort had reached agreement with the university student who sued the park six months ago for its ban on bringing in food from outside. The resort paid the third-year law student 50 yuan as compensation for the food that was confiscated in a January visit, and revised its rules to allow future visitors to bring in most food and beverage items.

In March, the student, Wang Jieying, sued Shanghai International Theme Park Co. Ltd., which co-owns Shanghai Disney Resort, after being denied entry with snacks she had brought from outside the park and for what she viewed as an overly intrusive check of her bag by park security guards.

Wang, who studies law in a local university, doubted the legitimacy of the resort’s food ban, and criticized the resort staff for infringing on her privacy in their search of her bags.

News of the case went viral following its publication in a number of Chinese media outlets last month. At the time, Disney described the rules as “consistent with most theme parks in China and other Disney parks in Asia.”

The company’s U.S. and European theme parks, however, allow visitors to bring in outside food, but its two other Asia-based parks, in Hong Kong and Tokyo, have retained a food ban, according to their websites. Visitors have always been able to bring their own nonalcoholic bottled drinks into all Disney parks.

Wang’s case forced the Shanghai park to revise its long-standing food ban. New rules have been published on its official website, which took effect starting from Wednesday. However, not just any foods can enter the premises, according to the resort, which has issued guidelines on what is and isn’t permissible.

The new rules permit most types of food and beverages, but ban a number of fiddly, messy, and pungent forms of nourishment, including instant noodles, meals that require heating by the user, watermelon, durian, and fermented tofu.

Disney’s volte-face came after web users shared their experiences of the ban and state media pilloried the company’s perceived double standards. In an interview with the media unit of the People’s Daily, Xue Binjun, Shanghai Disneyland’s director of security and health services, pledged to adjust the park’s food policies as well as its security check methods.

In recent years, a number of overseas companies operating in China, including electronics-makers and luxury clothing brands, have drawn a public backlash for perceived slights to the country’s territorial integrity and other forms of cultural insensitivity.

Matthew Walsh contributed to the report.