Opinion: No, China Is Not Waiting Out Trump on Trade 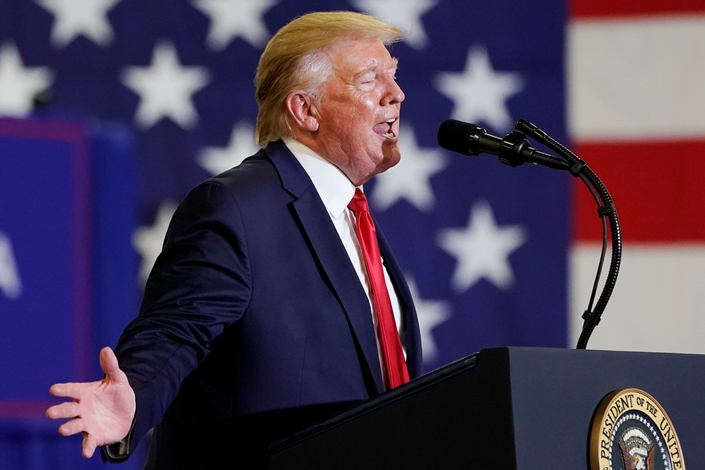 U.S. President Donald Trump speaks at a campaign rally in Fayetteville, North Carolina in the U.S. on Sept. 9. Photo: VCG

It’s U.S. President Donald Trump who started to suspect that China wants to see his defeat in the 2020 presidential election, allowing Beijing to negotiate a better trade deal with his successor, maybe a Democratic president.

“We are doing very well in our negotiations with China,” Trump explicitly tweeted on Sept. 3, “While I am sure they would love to be dealing with a new administration so they could continue their practice of ‘ripoff USA’($600 B/year).”

On the following day, Trump’s former campaign adviser and a China hawk, Michael Pillsbury, further fueled the suspicion during a Fox Business program. “That’s what the Chinese have told me,” Pillsbury claimed. “The president has said I am wrong and that is just wishful thinking on the part of the Chinese, but their analysts seem to believe a Democrat is going to win so they’ll get a better deal.”

Pillsbury is right on the point that it would just be “wishful thinking” that Beijing has adopted that approach. Beijing is not acting on such a political calculation. Not to mention that it’s 16 months away from next U.S. presidential inauguration. Anything could happen.

China’s struggle of reaching a trade deal with Washington has nothing to do with American election cycle. And there’s no assurance that the 2020 race won’t otherwise elect an even more protectionist candidate.

So far, the only candidate who has a real shot and could end the trade war is former Vice President John Biden. He favors a multilateral way to press China on trade concessions, instead of a unilateral tariff war. But, it is too early to predict a Biden White House.

And what would happen if Trump got reelected? He already tweeted out: “And then, think what happens to China when I win. Deal would get MUCH TOUGHER! In the meantime, China’s Supply Chain will crumble and businesses, jobs and money will be gone!”

Meanwhile, from Beijing’s point of view, it’s the Trump administration’s “unacceptable” demands that impeded the progress of the exhausted trade talks, leaving China no choice but to reject and fight back. Beijing considers some of its demands as intrusions on China’s sovereignty, including an U.S.-designed enforcement mechanism.

“Even the emperors of Qing Dynasty won’t accept those harsh terms,” a well-placed source familiar with Chinese government’s thinking told me, in reference to those Chinese emperors who signed humiliating treaties with foreign powers in late 19th Century after defeats on Chinese soil.

Whenever Trump substantially lowers his overly harsh demands, China would be willing to reach a trade war truce, the source added.

Liu He, China’s vice premier and lead trade negotiator, raised three “core principles” after a round of talks in Washington in early May, when the two sides were so close but failed to reach a deal. He said the first is to remove all additional tariffs, the second is to reach a deal to purchase a “realistic” amount of American agricultural products and the third is to make sure the text of the deal treats both sides equally.

The stalemate of the ongoing tit-for-tat trade war could go on and on if Trump sticks to his demands and rejects the three “core principles” while heading to his reelection campaign. In other words, China is not engaging in any wishful thinking. It is not waiting out Trump for any sort of a “better” deal in 2020.

Now, China and the U.S. are signaling a possible resumption of their stalled trade talks again, which are said to be slated for early October in Washington. But even if the meeting proceeds as scheduled, it is now more difficult for the two sides to reconcile than it was in early May.

The Chinese commerce ministry’s announcement on Sept. 5 sounded positive. It said the resumed talks were “striving for substantive progress” on the basis of “full preparation” by the working groups of both sides.

However, Peter Navarro, Trump’s top adviser and trade negotiator, told Yahoo Finance on Sept. 6 that the U.S. won’t back down from its demands in the previously failed deal, suggesting roadblocks remain for the two countries to make a pact. “We had a deal,” he said. “We had a 150 page plus agreement that was in these seven verticals that dealt with each of these issues plus enforcement … And that’s the basis for moving forward.”

The prospects of this October round look uncertain. Even if the two sides compromise to reach a partial, interim deal to calm the market, the fundamental disputes will remain. Furthermore, a looming global recession could further complicate the negotiation implications: if the U.S. economy fell into a recession in one or two years, Trump could end the trade war; if not, China has to fully prepare for an enduring hostile America.