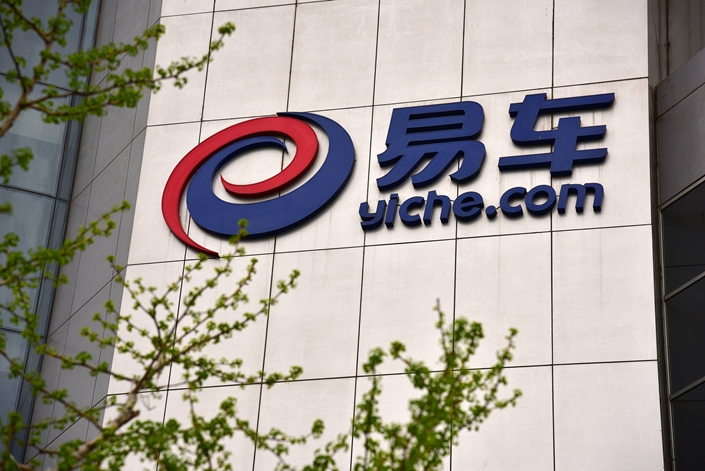 The Beijing headquarters of Bitauto, known in Chinese as Yiche, on April 4, 2018. Photo: VCG

Chinese car comparison site Bitauto would be delisted from the New York Stock Exchange under a buyout plan proposed by Tencent Holdings Ltd. and its private equity partner Hammer Capital.

The two companies said they would pay $16 per share to buy out the firm’s other shareholders, Bitauto Holdings Ltd. said in a statement late last week. That’s a 7% premium on Bitauto's Friday close.

The delisting offer was backed by three of Bitauto’s shareholders, who together own more than 48.5% of the company, including e-commerce company JD.com Inc. As of the end of last year, Tencent held 7.81% of Bitauto, while JD.com owned 25.4%, according to Bitauto’s annual financial report.

Founded in 2000 by entrepreneur William Li, who is also well-known for creating electric car startup Nio Inc., Bitauto went public in 2010. It runs a mobile app and desktop website that provides marketing and transaction services for Chinese car companies.

One of its major revenue streams is from dealerships, which buy access to the personal data of users — such as their purchasing intentions — to market their cars.

Bitauto has lost money each of the past four years, though last year its losses narrowed to 679 million yuan ($96 million) from 1.5 billion yuan a year earlier. In comparison, larger rival Autohome Inc. — also listed in New York — posted a profit of 2.87 billion yuan on revenue of 7.2 billion yuan last year.

Tencent, known for operating China’s most popular messaging app WeChat, has recently ramped up efforts to crack the automotive sector. Touting expertise and technology such as a trove of user data and cloud storage capacity, the internet titan has formed partnerships with companies ranging from automakers and dealerships to ride-hailing service providers.

Last month the company unveiled a voice-activated version of WeChat optimized for vehicles. It allows users to make calls as well as receive and dictate messages.