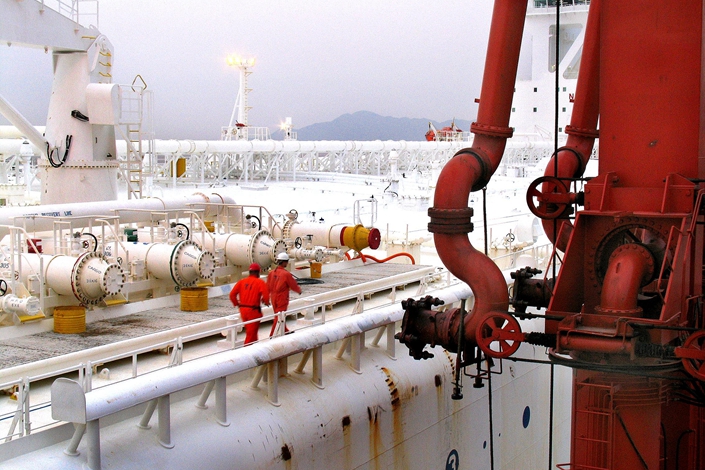 A tanker of foreign oil prepares to unload at the port of Ningbo, East China's Zhejiang province, on May 15. Photo: VCG

Oil production was slashed in half in the world’s largest oil exporter — representing a 5% drop in global capacity — after attacks on Saturday destroyed Saudi Arabia’s critical Abqaiq and Khurais oil processing facilities, which are owned by the state oil company Aramco.

U.S. officials have blamed the attacks on Iran, which denies involvement. They were claimed by Yemen’s Houthi rebels, who are engaged in a civil war against Saudi-backed forces.

A Chinese foreign ministry spokeswoman said Monday that it was not “responsible to assert who is responsible before a conclusive investigation.” In remarks the next day they condemned the strikes and said China was concerned about their impact on global oil supply and price stability.

The weekend attack prompted Sinopec and CNPC to swap some of their crude to heavier grades, which yield less gasoline and other fuels, insiders at the two oil companies’ refineries told Caixin.

Analysts at consulting group Wood Mackenzie said it would be weeks before most output from Saudi Arabia is restored, but the Middle Eastern nation may face challenges finding suitable kinds of crude to make up the shortage. The attack disrupted daily production of between 2.5 and 2.7 million barrels, most of which are light crude oil, the group said.

Saudi Arabia will draw on its oil stockpiles to fully supply global customers, Saudi Energy Minister Prince Abdulaziz bin Salman said. Industry research group S&P Global Platts estimated these will be able to supply oil plants across the world for 28 days. As of August, China had oil stockpiles of some 660 million barrels, which could supply the local market for around 45 days.

Companies like Unipec, the trading arm of Sinopec, have started seeking alternative oil supplies from other countries. Unipec recently carried crude on at least four vessels from the U.S., Reuters reported on Wednesday, citing a shipping source and Refinitiv Eikon data.

Chinese oil purchasers have placed a 5% tariff on imports of U.S. crude oil, which came into effect this month. China’s crude oil imports from the U.S. dropped 63% year-on-year to 3.65 million metric tons in the first seven months amid ongoing trade tensions.

China has tapped Saudi Arabia for a record volume of crude this year to plug a shortage from sanctions-hit Iran. The White House ended waivers allowing some countries to keep importing Iranian oil on May 2.