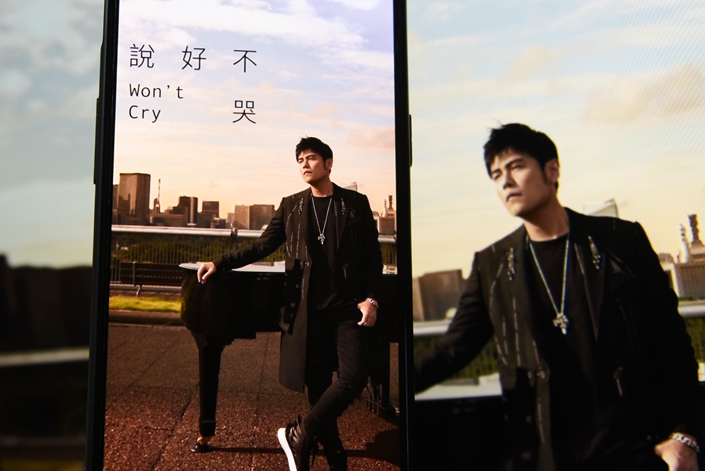 The fan fervor shows the potential for legit online music sales in China, a country where customers aren’t exactly known for being eager to pay for copyrighted content.

Although reviews have been mixed, the song is a commercial hit. At a price of 3 yuan (42 U.S. cents), it has racked up 8.54 million sales as of Thursday afternoon on the three music platforms owned by Tencent Music Entertainment Group, amounting to 25.64 million yuan in revenue in less than three days.

How much does Chou stand to gain from these digital sales?

Chou’s production firm JVR has paid Tencent Music a fee to publish the song and under their agreement sales will be divided between the two parties, according to a source from an online music platform. However, the source refused to disclose each side’s share of the proceeds.

Such revenue sharing agreements are hashed out in negotiations between production houses and the platforms that serve as publishers, said a former employee of Taihe Music Group who is familiar with music copyrights. Star musicians usually have an advantage in these negotiations because the online platforms are in fierce competition to secure the best content, he said.

Digital sales are not where most stars make their money. Most musicians earn far more from other sources of revenue, including live performances and advertising deals, the former Taihe employee said.

Chou’s businesses, for example, include restaurants, clothing and esports.

Chou’s new song, which for now can only be bought on Tencent Music’s three platforms, has been a publicity boon for the digital music provider. Its two major competitors, Netease-backed 163 Music and Alibaba-backed Xiami Music, have been left out.

The National Copyright Administration intervened in the industry last year to push the top three digital music platforms to agree to share 99% of the music copyrights they own with one another. However, the agreement left 1% of music copyrights up for grabs, including, apparently, Chou’s song.

New York-listed shares of Tencent Music Entertainment Group rose both Monday and Tuesday before closing 0.64% lower on Wednesday at $14.