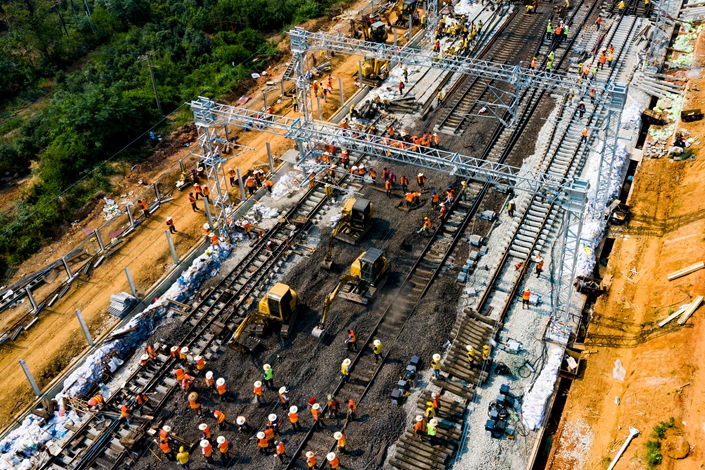 Construction workers are busy on Sept. 11 finishing a railway line designed to deliver coal from a mine in Xiyu, East China’s Jiangxi province, to market. Photo: IC Photo

A listed unit of China’s state-owned rail operator has committed to pumping an additional 4 billion yuan ($565.75 million) into the company building one of the nation’s longest coal transportation lines.

Daqin Railway Co. Ltd., which had already invested 2 billion yuan in the Mengxi-Huazhong Railway Co. Ltd., will up its stake to 10%, making it the project’s third-largest shareholder, the Shanghai-listed unit of China State Railway Group Co. Ltd. (CR) said in a statement.

Daqin is coming to the rescue for Mengxi-Huazhong, which is building a coal railway stretching across China from north to south, after two other participants failed to make payments on the construction project — including a different unit of CR.

Running from Inner Mongolia to East China’s Jiangxi province, the 1,814 kilometer (1,127 mile) railway line was supposed to open by the end of September. It will be capable of carrying 200 million tons of coals annually.

Construction began in 2015, but the project has run short by a total of 7 billion yuan, after CR unit China Railway Investment Co. Ltd. and a unit of China Construction Bank failed to make their payments under a previous funding agreement.

China Railway Investment backed out of the agreement due to a cash flow issue, a source familiar with the situation told Caixin.

Daqin expects Mengxi-Huazhong to lose money for the next several years before turning for a profit in 2023.

CR is China’s state-owned railway operator for freight and passenger services. The company changed its name from China Railway Corp. in June.

Daqin is CR’s only listed unit. Caixin reported last year that CR was planning to take its other unit — the operator behind Beijing-Shanghai high-speed railway line — to the public market.