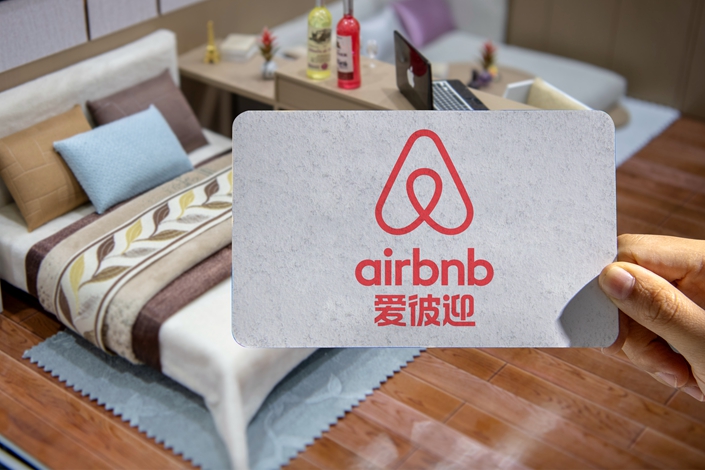 Airbnb will go public next year, the company said in a brief statement posted on its website Thursday. Photo: IC Photo

Airbnb Inc. will improve its localization approach in the important China market, its co-founder told Caixin, a week before the company told the world it would make a highly anticipated listing after years of pressure to do so.

The San Francisco-based company has loosened its grip on its China unit and empowered it with making its own locally-tailored strategy, Nathan Blecharczyk, Airbnb’s co-founder and chief strategy officer, told Caixin in a recent interview. Such an approach mirrors that followed by many similar multinationals, which have learned over the years that strategies that work well in the West don’t always do as well in the China market.

“We’ve invested heavily (in) having a team here,” he told Caixin in the interview earlier this month in Beijing, a week before the company told the world about its intention to list. “Not just a team, but a team that represents all the functions of the company. The Beijing office can operate independent of resources in San Francisco. So, as a global company, usually where the bottlenecks occur is when you’re trying to share resources.”

Blecharczyk is also the chairman of Airbnb’s China business and visited China about once per month in the past year to get updates on the local market. But with the China unit rapidly growing, he said, he may visit less often and given more decision-making powers to locally-based employees.

Airbnb launched its China unit in 2016 with about 30 people to handle local business. Since then the China-based headcount has grown to about 500, Blecharczyk said.

Airbnb helps link up travelers with homeowners across the globe, providing the former with short-term accommodations provided by the latter in a business that competes with traditional hotels. As one of Airbnb’s fastest growing market, China currently has roughly half a million listings, about one-twelfth of its total worldwide, according to Blecharczyk.

China is like “a different operating system” compared with the U.S. market, Peng Tao, president of Airbnb’s China business, told Caixin previously (link in Chinese). In particular, the Chinese government places less emphasis on privacy and requires Airbnb to register all of its travelers — both foreign and Chinese — with local police on each trip within the country. That includes things like sharing passport details and booking dates.

The top priority of Airbnb’s Chinese business is not profitability, as it is still in the early expanding stage that requires bigger investment, Blecharczyk said. In the first quarter this year, Airbnb boasted 2.16 million monthly active users in China. Homegrown rivals such as Tujia had 2.51 million monthly active users, and Xiaozhu.com had 2 million, according to data provider QuestMobile.

Airbnb’s China bet goes against a trend of departures from the fiercely competitive market by major online companies due to a lack of local know-how. E-commerce giant Amazon shut down its Chinese e-commerce business that hooks up domestic buyers and sellers in April. Ride-hailing giant Uber left China in 2016 after fighting a bloody battle for the market with local rival Didi Chuxing, which ended when the pair ultimately merged.

Despite those companies’ setbacks, China is being “prioritized from a company perspective,” said Blecharczyk. “There’s a good alignment between the market opportunity of China as well as Airbnb’s core strength,” he added, noting that many expect the country to become the world’s largest inbound travel market by 2030.

From the outbound perspective, Chinese travelers are some of the highest spenders in the world, accounting for 20% of global international tourism spending in 2016, said Blecharczyk, citing a report released by The International Association of Tour Managers, a London-based association.

Airbnb will go public next year, the company said in a brief statement posted on its website Thursday, bowing to years of pressure from company employees who wanted an opportunity to cash out of shares and options awarded as part of their compensation. The company previously said its earnings before interest, taxes, depreciation and amortization — generally considered a reflector of a company’s operating performance — were positive in both 2017 and 2018.