By Wu Hongyuran and Lu Zhenhua 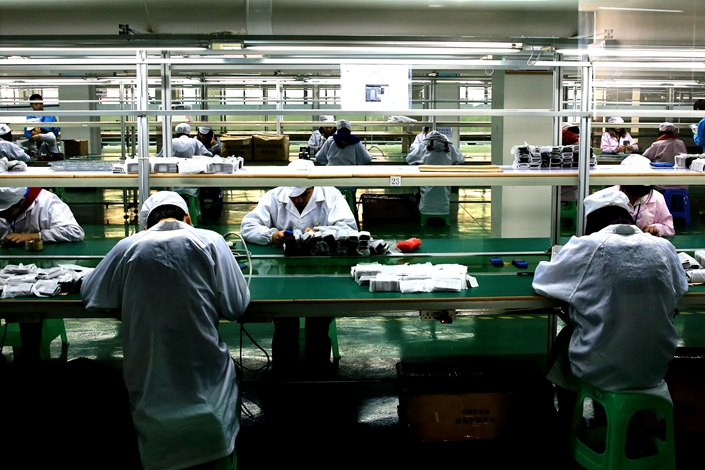 China’s local banks face a dilemma: Implementing a government directive to lend out hundreds of billions in newly released liquidity risks exposing them to bad loans as China’s economy continues to slow.

The People’s Bank of China, the nation’s central bank, cut the reserve requirement ratios by 50 basis points on Sept. 16, taking them to the lowest level since 2007. This cut, plus two targeted RRR cuts scheduled for the next two months, will effectively release about 900 billion yuan ($126.35 billion) of lending capacity into the market.

Finance officials hope to channel this into the real economy, targeting sectors such as manufacturing and small and midsize companies, while preventing the money from flooding into the already-overheated real-estate industry.

But interviews with local bank officials paint a picture of caution and fear about taking on more non-performing loans, as the nation’s manufacturing slowdown causes the number of good borrowers to dwindle.

“We have been continuing to adjust and reorganize the lending structure,” China Banking and Insurance Regulatory Commission spokesman Xiao Yuanqi told Caixin. Xiao emphasized that the commission is determined to control lending for real estate investment.

One eastern regional branch of the Agricultural Bank of China Ltd., which has about half of its lending capacity tied up in manufacturing companies, has lowered its lending rates below the central bank's benchmark interest rates to lure customers amid decreasing demand for loans in the sector.

“We are literally begging companies to accept our loans,” said a general manager at the branch.

China’s National Bureau of Statistics announced last week that growth in value-added industrial output slumped to a 10-year low of 4.4% in August.

A deputy branch chief of Industrial and Commercial Bank of China Ltd. (ICBC) said banks were now lending to manufacturers that were in bad shape — whether short on cash flow, or losing money.

According to ICBC’s semi-annual report, the bank, China’s largest, had a non-performing loan ratio in the manufacturing sector of 5.82% in June, far higher than the cross-sector average of 1.48%.

Within manufacturing, banks are favoring new tech firms such as producers of integrated circuits and 5G telecom equipment. But lending to such companies can mean a long wait for repayments.

“We need to wait at least 10 years for any results (of the business operation of these emerging industries). With such uncertainty, most of the time banks are only willing to approve medium- and short-term loans. It’s a dilemma for us,” a senior manager at Huaxia Bank said.

Aside from those sectors, the hundreds of billions in new liquidity has a convenient landing zone: local government financing vehicles, particularly those that fund local infrastructure projects.

During the release of a semi-annual report, ICBC President Gu Shu said some of the bank’s new lending in the first half of the year has been allotted to regional infrastructure projects, including the Beijing-Tianjin-Hebei province integration project, Yangtze River Economic Belt and Greater Bay Area.

A senior manager at China Construction Bank Corp. said more than 60% of the bank’s corporate loans went to infrastructure projects such as water conservation and energy.

But risk controls on local government debt could also get in the way. “I have not been in business for three months,” said a manager for local government financing at a city commercial bank in East China.

The new liquidity could also be used to purchase local governments’ general bonds and special-purpose bonds. Earlier this month, the central government expanded the policy that allows the use of the proceeds from special-purpose bond sales as project capital for infrastructure investments to cover 10 areas, including railways, toll roads, major airports, urban parking lots and natural gas networks.

This story has been updated with additional information for context and clarity.