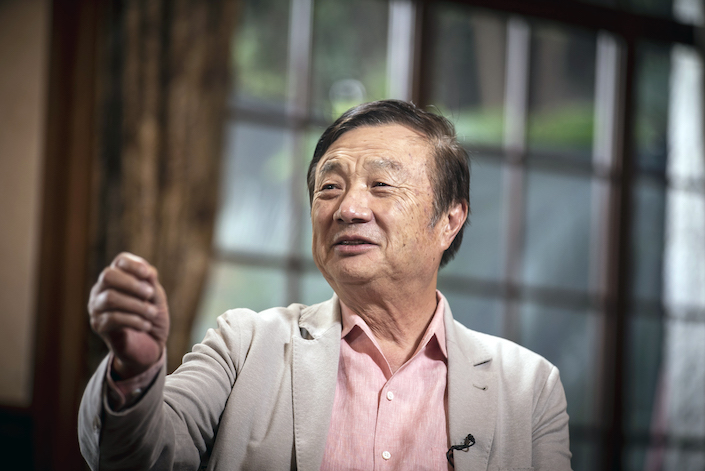 (Bloomberg) — Huawei Technologies Co. founder Ren Zhengfei is ready to license his fifth-generation networking technology only to one other company — and he wants that potential rival to be American.

The army officer-turned-billionaire reiterated an offer Thursday to license out Huawei’s full portfolio of 5G wireless technology — which would include chip designs, hardware and source code — to a single, exclusive licensee. That should be a U.S. company because Europe is home to close competitors like Nokia Oyj and Ericsson AB and doesn’t need help to compete, he said.

Huawei, accused by Donald Trump’s administration of aiding Beijing in spying while spearheading China’s tech-superpower ambitions, is trying to claw back business and shore up trust in its products. Ren reaffirmed an earlier estimate that U.S. sanctions could depress the company’s sales by $10 billion annually. His lieutenants have lately echoed his 5G licensing proposal to reassure foreign customers that Huawei’s gear is free of security loopholes. But a willing buyer has yet to emerge.

“We would like to offer an exclusive license to one company from the West so that it’s able to achieve economies of scale to support a business,” Ren said in a live-streamed discussion with visiting foreign academics. “With this one company, I think it should be a U.S. company.”

Critics charge that intellectual property theft from the likes of Cisco Systems Inc. and Motorola Solutions Inc. helped Huawei vault into the upper echelons of telecommunications providers, while Ren and his executives credit years of investment and research. The wireless giant is now accelerating spending on artificial intelligence chips and mobile software. It’s mobilizing its employees to source or develop alternatives to American circuitry and software to keep its edge in smartphones and next-generation 5G wireless technology.

Huawei is on track to produce 600,000 base stations this year and 1.5 million next year. The company can make that happen without American components but would prefer to buy from U.S. suppliers, Ren said.

The billionaire has gone from recluse to media maven in the span of months as he fights to save the $100 billion company he founded. The 74-year-old billionaire has taken the lead in Huawei’s defense after the arrest of eldest daughter and Chief Financial Officer Meng Wanzhou as part of a broader probe into the company. He’s since become a central figure in a U.S.-Chinese conflict that’s potentially the most important episode to shape world affairs since the collapse of the Soviet Union.

“As time goes by, trust levels will increase,” he said during a discussion with Stanford lecturer Jerry Kaplan and fellow academic Peter Cochrane. “If we’re talking about a tech decoupling or separate governance, I don’t think it’s possible.”