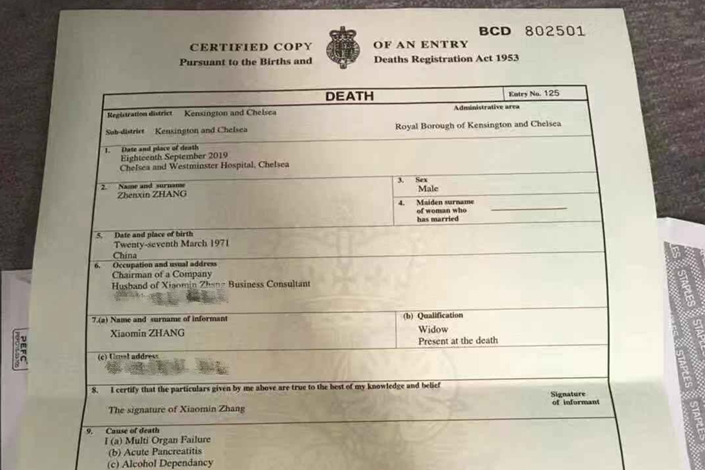 Chinese financial giant UCF Holdings Group Ltd. has a lot on its plate — billions in debt, embezzlement at affiliates and exceptional government oversight. And now the death of its founder has brought the struggling conglomerate further controversy.

Zhang Zhenxin, the shadowy tycoon behind the debt-ridden firm, died last month in London of multiple-organ failure resulting from acute pancreatitis linked to alcohol dependence, according to a death certificate issued by the local authorities and seen by Caixin.

The document confirmed the facts of a statement released last weekend by UCF Holdings, saying that Zhang died on Sept. 18 at the age of 48.

However, its belated release sparked widespread speculation on the company’s home turf especially given its massive debt burden. Some had even suggested Zhang might have faked his death.

Regardless, the debt isn’t going anywhere.

It’s unclear exactly how deep UCF Holdings is in debt, but Caixin has learned from regulatory sources that the conglomerate might owe more than 70 billion yuan ($9.8 billion).

Founded in 2009, UCF Holdings runs a wide range of businesses in areas including online payment, wealth management, online peer-to-peer lending, health care and investment. The group tumbled into debt in the second half of 2018 following a regulatory crackdown on online lending that started years ago, which triggered a meltdown in the sector. The firm was also hamstrung by poor risk management and investment decisions including an unsuccessful foray into cryptocurrencies.

Sources told Caixin that UCF Pay’s misconduct has led to a shortfall of 240 million yuan. The payment provider was taking advantage of the time gap between payments being made and their arrival in users’ accounts to spend their cash, the sources said.

With registered capital of 100 million yuan, UCF Pay had 5.4 million users at the end of March, and handled transactions totaling 215.7 billion yuan during the first quarter of this year, up 36% from a year ago, according to Chong Sing’s first-quarter financial report.

A person close to the matter said the problems with UCF Pay emerged early this year after several senior managers left the company. In March, the central bank’s branch in Dalian, Northeast China’s Liaoning province, fined UCF Pay 420,000 yuan for business violations. The regulator and the company didn’t provide any details of the misconduct at that time.

In May, financial regulators took the rare step of installing officials in the offices of N-Securities Co. Ltd., a troubled brokerage controlled by a UCF Holdings affiliate, to oversee its operations.

The brokerage had failed to meet regulatory requirements on at least four risk-control indicators — including its capital leverage ratio and net stable funding ratio, which assess a company’s ability to meet its financial obligations.

The brokerage posted a net loss of 2.9 billion yuan in 2018, down from a net profit of 8.8 million yuan the previous year, according to its annual report (link in Chinese). Its total liabilities surged to 23.8 billion yuan at the end of 2018 from 1 billion yuan a year earlier.

N-Securities was indirectly controlled by Zhang. In 2014, UCF affiliate United Venture Capital Group Co. Ltd. became the brokerage’s controlling shareholder and held a 55.61% stake at the end of 2018, according to its annual report. Two local state-owned enterprises in Shenyang, capital of Liaoning, hold the remaining shares.

N-Securities affiliate NCF Wealth Holdings Ltd. gained a backdoor listing in the U.S. in March when it completed a merger with Nasdaq-listed Hunter Maritime Acquisition Corp., although the company was later relegated to the over-the-counter market.