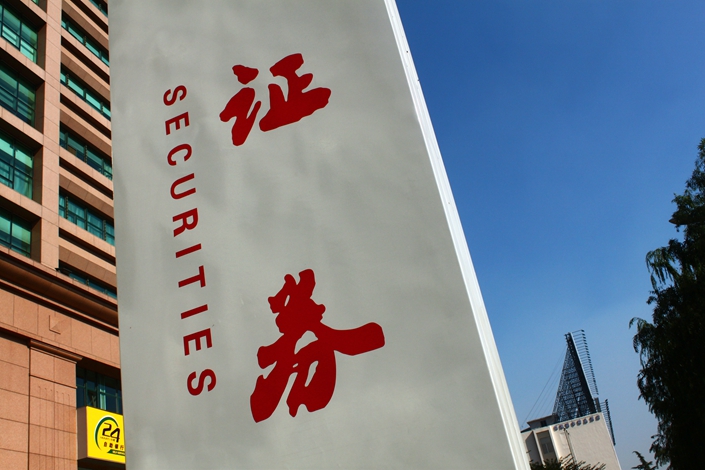 An indebted regional securities firm linked to a secretive tycoon with interests in peer-to-peer lending and bitcoin mining has found itself in the crosshairs of China’s financial watchdogs amid concerns over its financial health.

The Liaoning province branch of the China Securities Regulatory Commission (CSRC) said it has installed officials (link in Chinese) in the offices of N-Securities Co. Ltd., which is headquartered in the northeastern rustbelt province, to monitor its operations including money transfers, asset disposals, personnel arrangements, the use of company seals and contract signing.

Regulators have rarely stepped in to oversee a securities firm’s operations in such detail and the action indicates they have identified major risks in the business, judging by regulations (link in Chinese) enacted in 2008 that specify how officials should work to defuse risks in securities companies. From 2004 to 2006, the CSRC intervened to defuse risks among dozens of securities firms, closing 19 brokerages (link in Chinese) and reorganizing one firm for a variety of reasons including misappropriation of client funds and share price manipulation.

The onsite inspection of N-Securities could lead to punitive action including the suspension of the company’s business while it carries out remedial action, or even a takeover by regulators if they discover serious financial problems such as poor ability to control risk, according to the 2008 regulations.

The Liaoning branch of the CSRC’s decision to send in investigators follows months of monitoring (link in Chinese) the company’s financial health.

On March 5, the watchdog said N-Securities failed to meet regulatory requirements on at least four risk-control indicators — including its capital leverage ratio and net stable funding ratio, which assess a company’s ability to meet its financial obligations — in December and January and was given 20 days to make improvements. The following day, the watchdog issued a statement highlighting (link in Chinese) poor management of the firm’s information technology systems.

No one at N-Securities was available for comment when contacted by Caixin on Tuesday.

N-Securities, based in Liaoning’s provincial capital city of Shenyang, has been dogged by problems including weak profitability and rising debt. Among the 98 brokerages tracked by the government-backed Securities Association of China, the self-regulatory body for the securities industry, the firm ranked last in terms of net assets and net capital in 2017, and 93rd in terms of net profit, according to a report (link in Chinese) released in June 2018.

N-Securities is also embroiled in a legal dispute with a rural credit cooperative in the central province of Henan which won a court order (link in Chinese) in December to have 191.4 million yuan of the firm’s assets frozen. Industry sources have told Caixin that the credit cooperative took the brokerage to court because it failed to repay money borrowed by pledging bonds as collateral.

N-Securities is indirectly controlled by financial tycoon Zhang Zhenxin, a low-profile businessman who owns and chairs financial conglomerate UCF Holdings Group Ltd. In 2014, United Venture Capital Group Co. Ltd., a UCF affiliate, became the brokerage’s controlling shareholder and held a 55.61% stake at the end of 2018, according to its annual report. Two local state-owned enterprises in Shenyang hold the remaining shares.

A previous version of this story misstated approximately how many securities firms that the CSRC intervened at from 2004 to 2006 to defuse risks. It was dozens.

Wu Yujian contributed to this report.