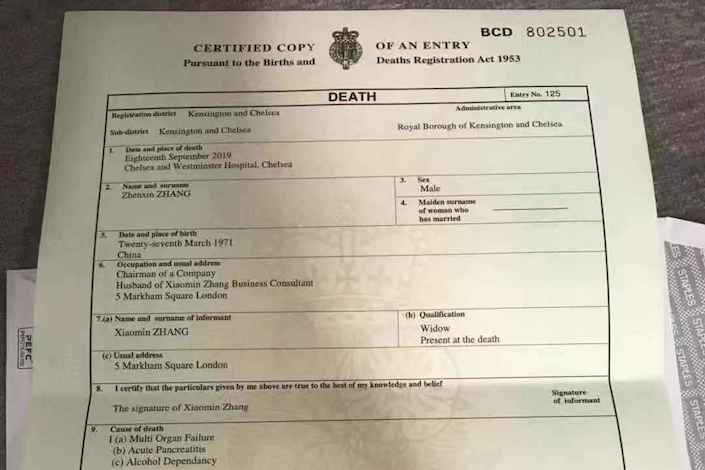 Zhang, whose death sparked widespread speculation because of the massive debt woes of his company, died Sept. 18 at the Chelsea and Westminster Hospital due to multiple organ failures linked to acute pancreatitis and alcohol dependence, according to a document issued by the Royal Borough of Kensington and Chelsea viewed by Caixin.

The document confirmed a previous statement by UCF Holdings during the weekend. The belated statement triggered questions. But the company said it acted prudently by waiting for official notification of Zhang’s cause of death, which was provided in a formal death certificate issued by the hospital Sept. 26.

The Chelsea and Westminster Hospital declined to provide more information about Zhang’s death on Caixin’s request. Zhang owned a residence about a mile away from the hospital, Caixin learned.

News of Zhang’s death ignited doubts among UCF Holdings’ creditors and investors as the company, along with affiliates and subsidiaries, have been rattled by a deep debt crisis. Speculation circulated on China’s internet that Zhang may have tried to evade the debts by faking news of his death.

Founded in 2009, UCF Holdings runs a wide range of businesses including online payments, wealth management, peer-to-peer lending, health care and investment. The group sank deep into debt in the second half of 2018 following a regulatory crackdown on online and P2P lending that started in late 2016 and triggered a meltdown in the sector, along with a series of misfortunes, bad risk management and poor investment decisions including an unsuccessful foray into cryptocurrencies.

Caixin learned from regulatory sources that the conglomerate’s debt may amounted more than 70 billion yuan ($9.8 billion).

In an Oct. 5 statement, UCF Holdings said it set up a temporary crisis management committee led by its chief executive, Zhang Liqun, which would continue trying to defuse risks and resolve the crisis through measures including the disposal of assets.