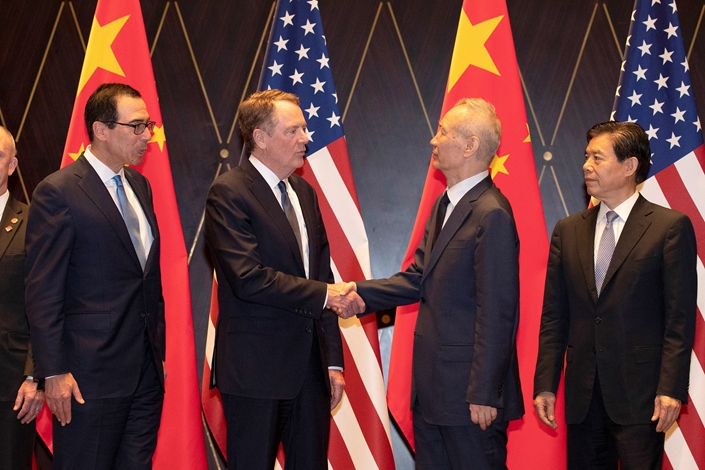 China and the United States are making progress on trade talks, with Beijing offering additional purchases of agricultural products while the U.S. is considering a suspension of tariff increase due next week, according to Bloomberg and the Financial Times.

The White House is also weighing a currency pact with China as part of the partial deal, Bloomberg reported Thursday.

The reports of progress come on the eve of the resumption of high-level trade talks in the U.S. capital, where China's Vice Premier Liu He is scheduled to meet with U.S. Trade Representative Robert Lighthizer and Treasury Secretary Steven Mnuchin starting on Thursday.

The two sides hope to avoid another round of tit-for-tat tariff hikes scheduled to take effect on Oct. 15 and want to “reset” the stalled talks, the Financial Times reported Wednesday, citing sources who were briefed on the talks.

Chinese officials are offering to increase purchases of U.S. agricultural products by $10 billion a year as they seek an interim agreement, the report said.

Citing officials with direct knowledge of the talks, Bloomberg reported that China is open to reaching a partial trade deal with the U.S.

Although the prospect of reaching a broad trade agreement remains low, China would accept a limited deal as long as no more tariffs are imposed by the U.S, including two rounds of higher duties set to take effect this month and in December, Bloomberg said.

In return, Beijing would offer non-core concessions like purchases of agricultural products without giving in on major sticking points, the report said.

The White House is also looking at rolling out a previously agreed currency pact with China, according to a separate Bloomberg report.

The currency accord, which the U.S. said had been agreed to earlier this year, would be followed by more negotiations on core issues like intellectual property and forced technology transfers, the report said.

No details about the pact were made public, Bloomberg said. Washington in August labeled China a currency manipulator.