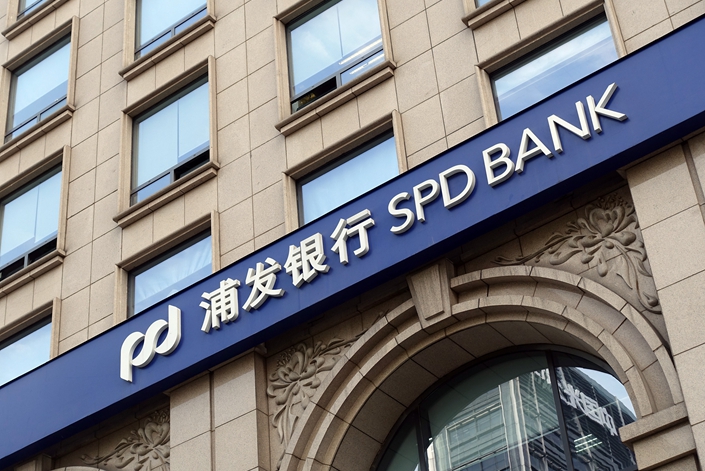 A branch of Shanghai Pudong Development Bank in Beijing on Aug. 7. Photo: VCG

The impact of two multi-billion yuan fraud cases exposed in 2017 involving second-tier Chinese lenders continues to reverberate, with three senior bankers fined and two given formal warnings by the regulator.

The former chairman of China Guangfa Bank Co. Ltd., Dong Jianyue, and former president, Li Mingxian, were given administrative warnings for mismanagement related to the fabrication of guarantee documents on 1 billion yuan ($141 million) of bonds that went into default and for compliance failures, the China Banking and Insurance Regulatory Commission (CBIRC) said in a statement on Oct. 11.

The Guangzhou-based bank was fined a record 722 million yuan by the commission, then known as the China Banking Regulatory Commission, in December 2017 for the fraud which came to light after 1 billion yuan of bonds issued by two subsidiaries of Cosun Group, a Guangdong province-based electronics manufacturer, went into default in December 2016.

Employees of Guangfa’s Huizhou branch colluded with Cosun to fabricate loan guarantee documents totalling 12 billion yuan, as the bank tried to conceal its huge amount of non-performing assets and operational losses. Five senior executives at Guangfa’s Huizhou branch, including the president and two deputy presidents, were fined and removed from the bank’s management team. Six Guangfa employees involved in the case were banned from working in the banking industry for life.

The CBIRC’s latest announcement also named three former senior executives at Shanghai Pudong Development Bank Co. Ltd. (SPDB) who were warned and fined over a case involving the lender’s branch in Chengdu, Sichuan province, where an investigation in 2017 found officials had falsified loan deals and hidden non-performing assets through a complex web of shell companies that were granted credit lines totaling 77.5 billion yuan. The lender was fined 462 million yuan over the fraud in January 2018, one of the stiffest penalties ever imposed on a bank.

“The two cases indicate that the board of directors and the management board of some banking and insurance institutions are not doing their job well enough, and their internal controls and risk management need to be strengthened,” the CBIRC said in its statement.

Caixin’s investigations found that the SPDB fraud led to the creation of nearly 30 billion yuan of non-performing loans. Several bank executives including Wang Bing, the former president of the Chengdu branch of the bank, are still under investigation.

The commission also imposed a fine of 1.3 million yuan on the SPDB for “seriously ignoring the risk status of the credit business of the Chengdu branch, and failing to take effective measures to verify the rectification,” according to a separate statement (link in Chinese). “There were problems including the failure to report the findings of a major audit (of the branch) to the regulatory authorities in a timely manner.”