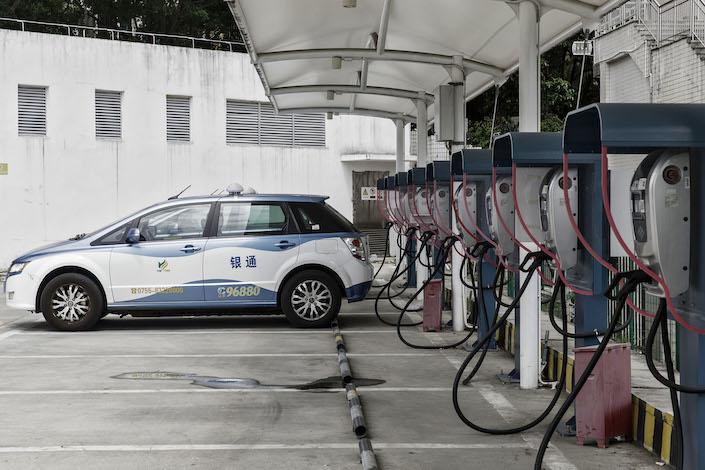 China, the world’s biggest market for EVs, has about eight public chargers for each one in the U.S. That imbalance is likely to become more pronounced as China champions the technology and spurs automakers to pivot away from gas guzzlers. China is accelerating its rollout of electric pumps, enlisting energy giants Royal Dutch Shell Plc and BP Plc along the way.

A new-energy vehicle development plan under consideration by Chinese officials and intended to shape the sector through 2035 will set new goals for increasing the number of public and private chargers, a person familiar with the proposal said in September. The nation is said to be weighing a target of 60% of all automobiles sold to run on electric motors by then.

All told, China’s electric fleet may swell to 162 million vehicles by 2040, according to forecasts by BloombergNEF (BNEF).

“The availability of charging facilities has been rising pretty quickly,” said Jing Kai, deputy head of the Beijing unit at Qingdao TGOOD Electric Co., which has the country’s largest network of charging plugs. “The goal is to help EV users charge their cars wherever they go, making it as easy as buying a bottle of water.”

China’s Ministry of Industry and Information Technology, which oversees policymaking for the auto sector, didn’t respond to a faxed query.

By comparison, there were 60,652 electric charging stations in the U.S. as of June 25, according to BNEF. California has the most of any state with 19,000 — or about the same number China adds in an average month.

With global EV sales forecast to rise to 56 million units by 2040, compared with about 2 million last year, there’s a need to vastly increase the number of publicly accessible chargers — not just to serve the expanding fleet but also to convince wavering consumers they can switch to electric models without fear of being stuck on the highway with a drained battery.

As the speed of charging stations increases, motorists increasingly are likely to refuel at workplaces, shopping malls or on the highway.

In the U.S., automakers such as Tesla and Volkswagen AG are leading the push to add more chargers, including high-speed units. The number of points could surpass 400,000 by 2025, according to a forecast by Wood Mackenzie Ltd.

Globally, there could be as many as 20 million public charging points installed by 2030, the International Energy Agency forecasts.

Yet even in China, a nation with more chargers than any other, drivers still get frustrated trying to find a spot to juice up.

Tom He drives a 25-seat Skywell minivan made by Nanjing Golden Dragon Bus Co. to shuttle workers between home and workplaces in Beijing. He can cover as many as 160 kilometers (99 miles) on a single charge.

“It’s not that easy to find an EV charging place,” He said. “It drives people crazy when you can’t charge them.”

Costs also are a consideration, and it’s not uncommon to see EV owners lining up to use charging stations at night when electricity prices are lower, TGOOD’s Jing said. The company operates more than 131,000 connectors that fit almost all EV models in China, according to data compiled by BNEF.

“There’s still a long way to go and a lot of issues we need to crack,” Jing said.

Billions of dollars in government funding previously directed at lowering vehicle sticker prices now are being channeled in part toward expanding the number of charging stations, industry minister Miao Wei said in March. Some local authorities are offering incentives to lower construction costs for developers and to cut charging fees for consumers.

There’s a risk that China is rushing too fast to install chargers, especially as the overall car market recorded falling sales in 15 of the past 16 months. That’s contributing to fears the nation’s EV bubble is bursting.

Still, BP and Shell, among the energy industry’s biggest investors in cleaner technologies, are making moves to join China’s expansion.

London-based BP in August agreed to form a joint venture with ride-hailing company Didi Chuxing. The companies opened a pilot site in Guangzhou with 10 fast-charging units.

Shell, which has acquired two companies in the charging sector in the past two years, installed its first EV pump at a regular gas station in Tianjin.

“It’s a challenging job to become competitive in the charging equipment business, but we kept investing heavily in leading technologies,” said Yu Dexiang, founder of TGOOD. “Companies that fail to do these things in the future will be gradually eliminated.”