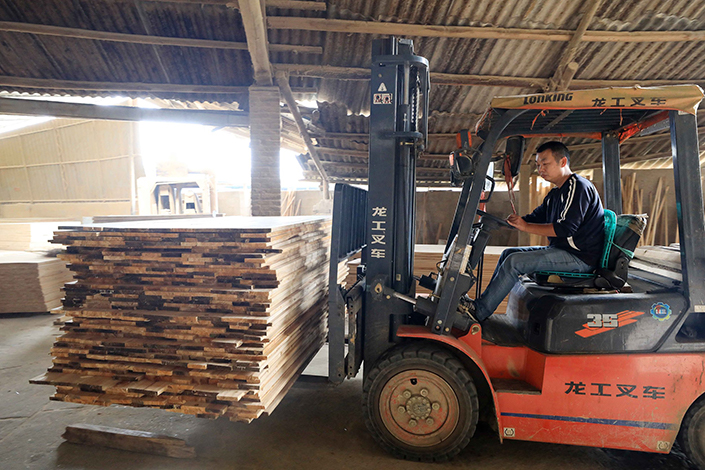 China’s five largest state-owned banks have fulfilled their political tasks to boost small business lending ahead of schedule as policymakers seek to give the struggling private sector a helping hand.

The banks’ goal of increasing lending to small businesses by 30% this year underscores the financial struggles of credit-starved private businesses as economic growth slows, but could also raise the specter of higher nonperforming loan ratios across the banking sector.

By the end of September, the value of outstanding loans to small businesses at the “Big Five” lenders rose to 2.52 trillion yuan ($356.42 billion), up 48% from the end of last year, Zhu Shumin, a vice chairman of the China Banking and Insurance Regulatory Commission, said at a press briefing on Monday. That met the whole-year target proposed by Premier Li Keqiang in March as an order to large state banks.

For the banking sector as a whole, the value of outstanding loans to small businesses — defined as those with total credit lines lower than 10 million yuan — at the end of August rose by 16.85% from the end of last year to 10.9 trillion yuan, Zhu said. The rate was 8.15 percentage points higher than the growth rate for all bank loans.

In 2018, many private businesses, especially small ones, began experiencing financial difficulties, including bankruptcy, as policymakers pushed ahead with a campaign to get domestic debt under control just as the global economy slowed and the U.S. and China embarked on a trade war. The situation made easing the financing difficulties of small and private businesses a priority.

Small banks have felt the pain of getting their clients poached by big banks and have begun to cut their own rates in response. “We have to cut loan prices a bit. Otherwise more clients will end up getting poached,” said the branch head at a Zhejiang-based bank, adding that the branch had cut the interest rate on small business loans by 1 percentage point.

In Depth: Banks Go to War to Meet Beijing’s Goal of Lowering Rates for Small Businesses

But some industry observers worry that low interest rates offered by big banks won’t be enough to cover their funding costs or the high risks of lending to small businesses, as such loans generally go bad more often than the average loan. The nonperforming loan ratio for small business loans was 5.9% at the end of May, 4.5 percentage points higher than that of loans to large businesses and 3.3 percentage points higher than that of loans to midsize businesses, Zou Lan, then a deputy head of the People’s Bank of China’s Financial Market Department, said at a June press conference.

Zhu Liangtao contributed to this story.