China’s Big Cities Get Cleaner Air, But at What Cost? 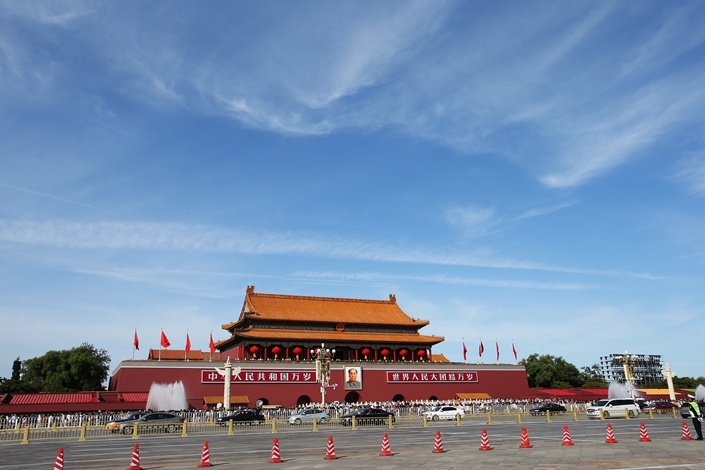 But behind the newly blue skies in megacities like Beijing and Shanghai is a much more nuanced picture of China’s hinterland. In places like Shanxi province to Beijing’s west and poorer provinces to the south, pollution levels have stalled at higher concentrations or even started backsliding as those regions take on some of the dirtier business booted out of big cities.

That phenomenon, known as “emissions outsourcing,” may be gaining traction in China. It occurs when wealthier areas that place greater emphasis on air quality shift their polluting industries to poorer regions with laxer standards, and is usually considered in a global or regional context. The U.S., for example, has slashed its greenhouse-gas emissions in the past decade by shifting polluting industries to developing countries.

But in a country as vast and varied as China, the outsourcing principle also applies within the nation’s borders, with large, wealthy population centers pushing polluting industries into poorer inland areas.

A recent peer-reviewed study in the journal Science Advances looked at the levels in China’s big cities of pollutants like carbon dioxide and PM2.5 — ultrafine particles that can pass through the lungs into the bloodstream and damage most if not all organs in the human body. It then compared those with nearby areas and concluded that emissions “spillovers” can indeed occur.

“Our results show that the reduction in primary PM2.5 and secondary precursor emissions in the target regions comes at the cost of increasing emissions especially in neighboring provinces,” the study’s authors wrote. “Similarly, co-benefits of lower CO2 emissions and reduced water consumption in the target region are achieved at the expense of higher impacts elsewhere, through outsourcing production to less developed regions in China.”

The Science Advances paper built on a 2013 study by an American research organization showing that up to 80% of emissions related to goods consumed in China’s richer coastal provinces are imported from less-developed central and western regions that manufacture many of the country’s low-value-added, highly carbon-intensive products.

The bigger pollution loads being taken on by less affluent areas are showing up in improving air for megacities like Beijing.

Recent air quality data suggests that the Chinese capital’s 21 million residents are, in some ways, breathing more easily than ever. In August, average daily concentrations of airborne PM2.5 fell to a record low of 23 micrograms per cubic meter, according to the municipal ecology and environment bureau. If accurate, that figure would mean Beijingers enjoyed better air than Londoners and Parisians during the same month, according to data from the World Air Quality Project.

Beijing’s clear-skied August was no one-off, either. After a hazy start to 2019, the capital has smashed through a slew of air quality records in recent months, posting the lowest levels of several pollutants since data collection began some 35 years ago. Average daily PM2.5 levels fell to 46 micrograms per cubic meter in the first six months of 2019, a 13.2% drop compared with last year.

Beijing’s blue skies are testament to government policies that have closed polluting factories, restricted the use of coal-burning heaters, and eliminated millions of high-emitting vehicles, all of which have driven incremental emissions cuts across a swath of northern China.

The tumbling figures have heartened environmental experts growing increasingly confident that the kind of “airpocalypse” extreme pollution events seen in 2013 and 2014 are now a thing of the past. “In the last seven years, smog levels have evidently improved in terms of both frequency and pollution density,” Liu Xin’gang, an associate professor at Beijing Normal University’s environment faculty told Caixin.

But the picture is far less clear in some areas near Beijing, such as the coal-rich, heavily industrial province of Shanxi about 300 kilometers to the west. After several years of progress, air quality improvements there have stalled or gone into reverse, with average PM2.5 levels rising by 7% year-on-year to 60 micrograms per cubic meter in 2016, remaining flat in 2017, and edging higher again in 2018.

Between January and June this year, pollution levels in five out of 11 targeted cities in the province rose compared with the same period last year. Eight showed pollution levels significantly higher than the average for the greater Beijing region, which includes the capital, the city of Tianjin, and surrounding Hebei province. The worst culprits were the Shanxi cities of Shuozhou and Datong, where air quality worsened by 11.7% and 10.2% year-on-year, respectively.

Something similar happened in southern China the last time the country launched an aggressive campaign to curb winter air pollution in a number of northern cities in late 2017 and early 2018, according to Lauri Myllyvirta, a senior analyst at the Greenpeace’s global air pollution unit. The move boosted existing restrictions on polluting sectors like coal, steel and construction, effectively forcing industry players out of the target region and into less-affected areas.

“There was a dramatic reduction in pollution levels in the Beijing region and a very clear increase across the south, in provinces like Jiangsu, Anhui, Guangdong, and Fujian,” Myllyvirta said.

Another action plan — a three-year drive to preserve cities’ hard-won blue skies — calls on many eastern provinces to put ambitious caps on coal consumption in the run-up to a looming 2020 deadline. Provincial governments are already scrambling to figure out ways to bring coal use into line with the policy, with some openly advocating outsourcing their emissions.

“One plan in Zhejiang says they’ll meet their coal consumption target by outsourcing — by importing more power, and potentially more steel and cement. The same will most likely be the case with Guangdong and other provinces,” Myllyvirta said. “There’s an expectation that a lot more coal-fired power will be imported into the east via new ultrahigh voltage transmission lines with a lot of capacity for transporting power from the coal bases in the west.”