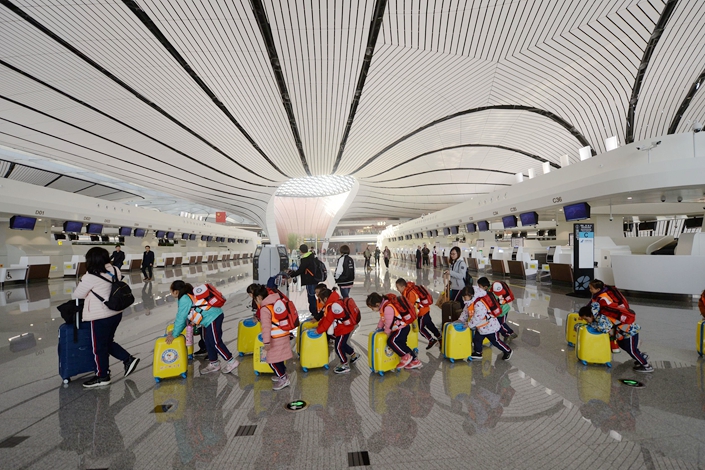 Following its formal launch a month ago, Beijing’s new Daixing International Airport is starting to ramp up its operations en route to becoming one of the world’s next major aviation hubs.

During the current travel season that runs from Oct. 27 through next March 28, the immense new airport south of Beijing should boost its daily flight count to an average of around 279, or 1,952 per week, according to plans outlined on the Civil Aviation Administration of China’s website. Those figures would be about double the amount during its initial period of operation.

The airport officially opened on Sept. 25, making Beijing one of China’s few cities with two major airports. The new facility is designed to ultimately handle more than 100 million passenger trips per year. By comparison, the currently overstretched Beijing Capital International Airport has a designed capacity for about 76 million, even though it now handles more than 100 million.

Located 46 kilometers (29 miles) south of the city center and costing 80 billion yuan ($11.3 billion) Daxing has been billed as the world’s largest flight terminal in a single building, covering 700,000 square meters (173 acres), according to the state-owned China Daily. Construction began four years ago and was finished in June.

The new airport will be ramped up gradually in the next three years, with the migration of flights from the older airport expected to be complete by March 2022. By that time, the older Beijing Capital will go from its current volume of an average 1,750 daily flights in October to about 1,350 flights per day.

Among China’s big three state-owned airlines, Guangzhou-based China Southern and Shanghai-based China Eastern will both ultimately move nearly all their Beijing operations to the new airport. Beijing-based Air China will operate at both airports, with its larger operation at Beijing Capital.

In the current season, Air China, China Southern and China Eastern will account for 7.8%, 9% and 7.35% of Daixing’s total flights, respectively.

As part of the switch so far, a small volume of flights have been transferred to Daixing since its Sept. 25 official launch. That has caused the average daily flights at Beijing Capital to drop about 4.25% to 1,646 per day in the current season.