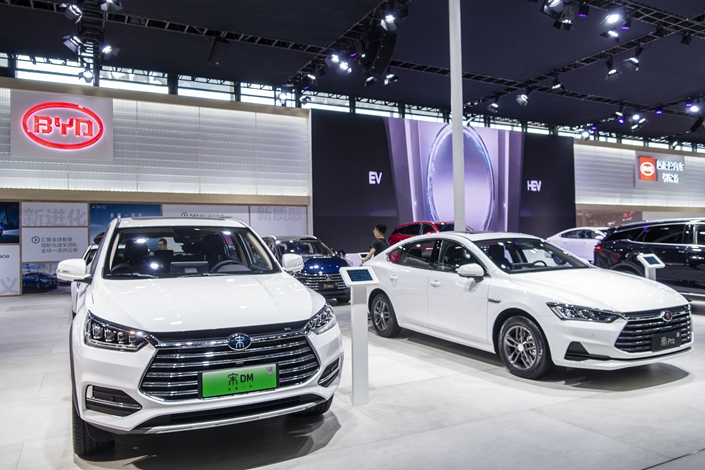 BYD showcases its new-energy vehicle models at an auto show in Shanghai in September 2018. Photo: VCG

BYD Co. Ltd., China’s largest manufacturer of new-energy vehicles (NEVs), has shocked investors with news that its full-year profit could plunge as much as 43% on sluggish sales, as the central government continues to phase out generous industry subsidies.

The company, which mainly makes NEVs — a category that includes pure and hybrid electric vehicles — forecast 2019 profits of between 1.6 billion yuan ($230 million) and 1.8 billion yuan, down from 2.8 billion yuan last year, in an earnings report filed with the Hong Kong and Shenzhen stock exchanges on Tuesday.

The firm blamed macroeconomic conditions in the update, pointing to weak overall automobile demand, as well as the reduction of subsidies that it said hit sales.

In September, BYD’s sales of NEVs dropped for the third consecutive month to 13,681. BAIC BJEV, China’s second-largest manufacturer of NEVs, sold just 10,009 of the vehicles in September, a monthly drop of 63.3%.

The softening sales follow Beijing’s decision to cut the subsidies that created the electric-vehicle industry at the first place. China rolled out generous grants from 2010 to promote electric cars in a bid to clean the country’s polluted air and also help develop cutting edge technologies for export.

Now, the government is seeking to make electric car-makers more self-reliant and wind down all financial support for the industry by the end of 2020. The latest phase of cuts, which began June, slashed subsidies for new-energy passenger vehicle manufacturers by 50%.

As prices have risen, China’s overall NEV car sales fell by 34.2% in September, the third consecutive month of contraction this year, according to the China Association of Automobile Manufacturers, the country’s biggest auto industry association.

In August, the association lowered its expectation of China’s overall NEV sales to 1.5 million vehicles, after it forecast sales of 1.6 million early this year.