By Shi Enze and Isabelle Li 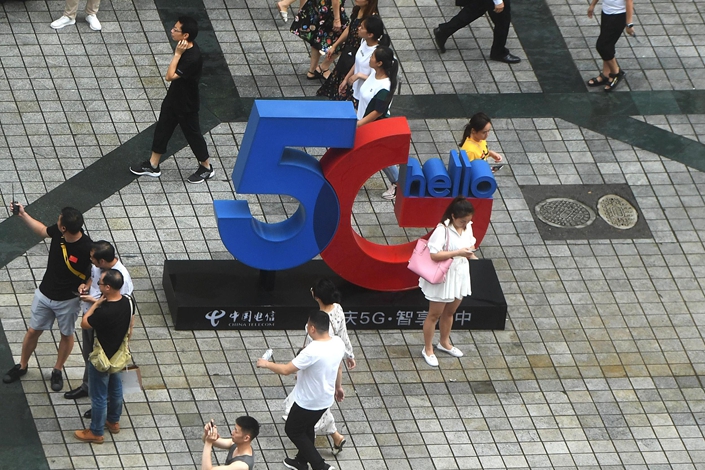 A total of 130,000 5G base stations will be available in China by the end of this year, an official said. Photo: VCG

In press releases, the companies said that prices range from 128 yuan ($18.10) to 599 yuan, depending on the amount of monthly data included and the speed of the package. The smallest packages are 30 gigabytes (GB) per month, and the largest reach 300 GB.

This is a significant step above the usual cost for 4G services in China, a telecom sector analyst at a securities firm said. The analyst said that while 4G packages usually cost from 58 yuan to 88 yuan a month, “5G consumer services in general offer more data at higher prices.”

The higher prices are in part due to the cost of building new 5G networks, said the analyst. According to Nomura Securities, the cost of the country’s 5G network will be 1.2 trillion yuan between 2019 and 2025, with average annual spending 8% higher than in the period when the country was developing its 4G network.

However, 5G services are not available nationwide yet. All three telecom carriers separately said they launched 5G in 50 cities on Thursday.

Speaking at the PT Expo, Vice Minister Chen Zhaoxiong of the Ministry of Industry and Information Technology (MIIT) said a total of 130,000 5G base stations will be available in the country by year end, and major cities like Beijing will have full 5G coverage by year end. There were around 80,000 5G base stations as of the end of September, according to MIIT data.

Spurred by international competition, China raced early into 5G by issuing commercial 5G licenses ahead of original plans in early June. South Korea started 5G commercial operations in April, and some areas of the U.S. have also introduced the service.

In June, MIIT official Wei Leping told Caixin that a nationwide rollout of 5G services will take time due to the high costs, and said that there are few applications currently available that can fully take advantage of 5G’s high-speed data transmission capabilities.