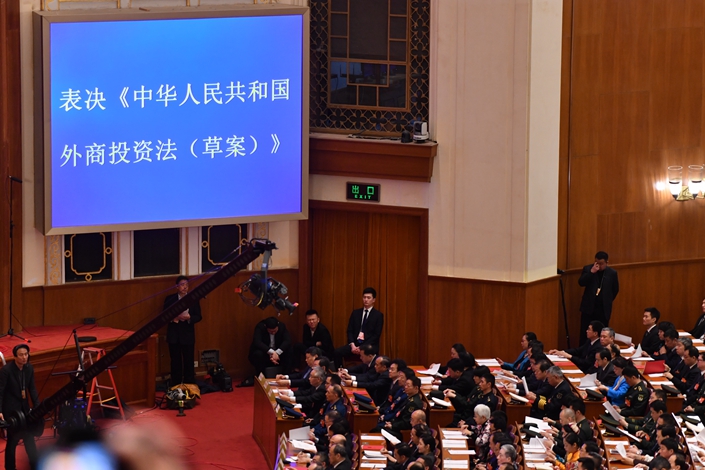 China has dished out more details about its new Foreign Investment Law due to take effect next year, but researchers and foreign investors want more.

The release of the draft of the law’s implementation guidelines, published Friday by the Ministry of Justice, offers a glimpse into how far Chinese lawmakers are willing to go to address foreign companies’ complaints about unfair treatment, including forced technology transfers. That issue of technology transfers, in which foreign firms say they are railroaded into handing over valuable intellectual property to Chinese partners in order to operate in the country, is one of the thorniest issues behind the China-U.S. trade war.

According to the draft of the guidelines (link in Chinese), authorities will be banned from forcing foreign investors to transfer technology when registering businesses, giving permission for investment projects, undertaking inspections and meting out punishments. The draft is currently open to public comment and has been sent to foreign companies and chambers of commerce for feedback.

The draft suggests that forced technology transfers will be banned not only when foreign investors apply for access to the Chinese market, but also when regulators and businesses engage on other matters, said Cui Fan, a professor at the Beijing-based University of International Business and Economics.

As the trade war raged earlier this year, China’s top legislature passed the new Foreign Investment Law to replace the three landmark laws from the 1970s and 1980s on foreign investment. The new law’s aim is to “improve the openness, transparency and predictability of the investment environment.”

The draft also provides more details on leveling the playing field for foreign companies in China. It says that authorities must treat foreign and domestic companies equally when instituting measures to support businesses, including government funding and tax incentives. It also forbids governments from discriminating against foreign companies when putting government contracts up for bid.

But researchers said the draft still does not provide enough details about how the law will be implemented. For example, the document does not contain any reference to a controversial “safety review system” mentioned in the law that could potentially grant the government sweeping powers to examine foreign businesses’ technologies in the name of national security.

Comments from the U.S.-China Business Council said that the draft implementing the regulations should “narrow the scope of national security review criteria by maintaining the balance between an open trade and foreign investment environment and national security concerns.” The business group is a nonprofit organization of around 200 American companies that do business with China.

China has created a list of industries that foreign investors are restricted from putting their money into, commonly known as “negative list.” However, the draft regulations exempt overseas-based companies from the restrictions if the firms are established by Chinese individuals or other entities. The provision could stir controversy about whether such companies should be regarded as foreign, said Ma Yu, a researcher at the Chinese Academy of International Trade and Economic Cooperation, a government-backed think tank.

Some businesspeople suggested that authorities should not only focus on the Foreign Investment Law, but also improve related laws and regulations, such as the Anti-Unfair Competition Law, Patent Law and Anti-Monopoly Law, to foster a better environment for foreign investors to do business in.