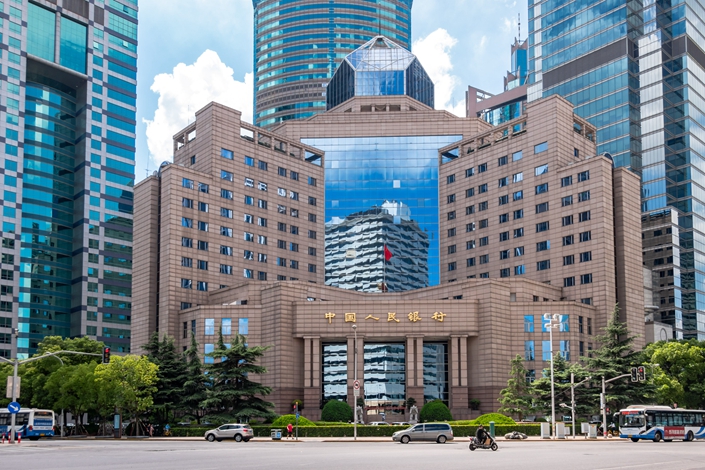 The Shanghai branch of the People's Bank of China in Pudong New Area on Aug. 1. Photo: IC Photo

A former central bank official is being probed for alleged legal violations in connection with his work, a local inspection committee has announced in a case that could have significant implications for China’s huge online payments industry.

Yang Biao, who was once deputy director of the financial services department at the People’s Bank of China’s Shanghai head office, is being investigated for “serious violations of law,” a district inspection committee in the city said last week in a post (link in Chinese) on its official WeChat account.

Yang worked for years at the payment and settlement regulation department of the central bank’s Shanghai head office and headed a payment unit in the financial services department from 2007. He left the central bank in 2014 and has worked in senior roles at payment companies since then.

It’s unclear what Yang’s current post at Shanghai Jifu is, but the cache of a May page on the company’s website retrieved by Caixin shows he was then executive general manager. The post has since been removed.

Local authorities did not disclose what precisely had sparked the investigation. But multiple industry sources close to Yang told Caixin they suspected it was related to his time at the central bank’s Shanghai office.

The probe has sent shockwaves through the sector because at that time China’s online payments industry was still in its formative stages. If the case is indeed related to licensing for third-party payments, then “the impact could be huge,” an industry source told Caixin.

“It won’t be surprising if there was some wrongdoing involved, especially when regulators handed out more than 200 licenses over the years,” another industry source said.

China’s central bank started licensing third-party payment providers, mostly to process payments from online shopping for goods and services, in May 2011. The regulator issued more than 270 payment licenses up until 2015 when scandals and risks began to emerge. Some players in the payment sector had reportedly embezzled clients’ deposits — mostly prepayments for goods and services.

In 2016, the State Council, China’s cabinet, clamped down on internet finance, which also cast a shadow on third-party payment companies. The central bank has since withdrawn some licenses, and the latest data show that about 230 companies have retained official approval.

While at the central bank in Shanghai, Yang said publicly at an industry briefing that companies that didn’t have a connection at the PBOC’s head office could go to him for license applications.

In 2013, Yang published a book about payment regulation in which he claimed responsibility for about 30% of the licenses granted to China’s third-party payment institutions. Most of the companies in Shanghai that looked to obtain payment licenses were linked to Yang, an experienced industry source said.

This story has been updated to clarify that Yang worked at the payment and settlement regulation department of the central bank’s Shanghai head office.