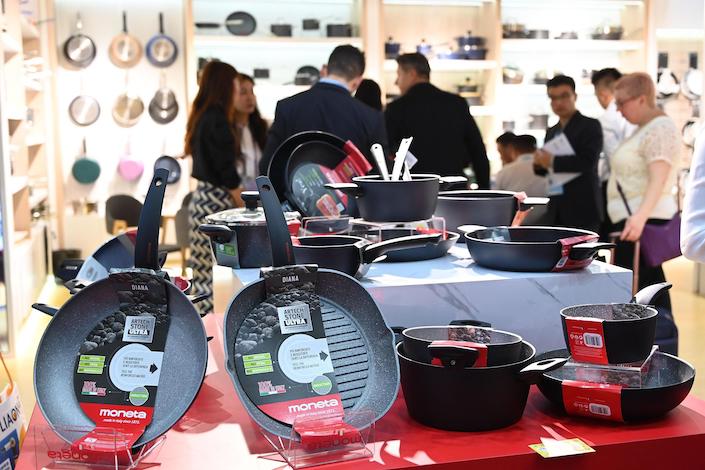 Fewer buyers came and the volume of deals declined at this year’s fall Canton Fair, China’s biggest twice-yearly trade event, but things started looking up as China and the U.S. moved closer to ending their 18-month trade war. The fall event concluded Monday.

The China Import and Export Fair, held every spring and fall in the southern city Guangzhou, is widely seen as a barometer of China’s foreign trade. The number of buyers attending the fall fair fell 2% from a year earlier to 186,000, and export orders booked at the fair also dropped 1.9% to 207.09 billion yuan ($29.3 billion), according to the fair organizer.

Attendance was the lowest since 2017, but the decline was less than the 3.9% year-over-year drop at the spring fair in May, when prospects for ending the trade war between China and the U.S. were gloomier. Before the trade conflict, the spring fair in 2018 attracted more than 200,000 buyers from all over the world.

The three-week fall Canton fair coincided with a breakthrough in U.S.-China trade talks that led to a partial “phase one” deal announced just before the event opened.

Against the backdrop of slowing global economic growth and a more complex and challenging foreign trade environment, the number of buyers came within expectations, but attendance improved steadily, said Xu Bing, spokesperson of the Canton Fair and deputy director general of the China Foreign Trade Centre, organizer of the fair.

One highlight of the fall fair was an increase of 40% in orders from Southeast Asian countries to $3.4 billion. Nearly one-third of attendance among the top 10 countries and regions was from members of the Association of Southeast Asian Nations (ASEAN).

The trend was in line with China’s overall trade numbers. The 10-member ASEAN bloc became China’s second-largest trading partner in the first half of 2019, overtaking the U.S. for the first time since 1997, China’s state-run Xinhua News Agency reported.

China’s customs data showed that China’s trade with ASEAN members rose 11.5% to 3.14 trillion yuan in the first three quarters of this year as trade with the U.S. dropped 10.3% to 2.75 trillion yuan.

China’s industries are stepping up transfers to ASEAN countries, with many Chinese manufacturers having moved assembly plants to Southeast Asia. But a large number of components still need to be imported from China, so China’s shipments of “intermediate products” to ASEAN countries are increasing, said Xiao Yaofei, a professor with the School of Economics & Trade at Guangdong University of Foreign Studies.

At the spring and fall Canton fairs this year, transactions involving mechanical and electrical products accounted for more than half of total export orders, with buyers from Southeast Asia showing particular enthusiasm.