By Lin Jinbing and Huo Kan 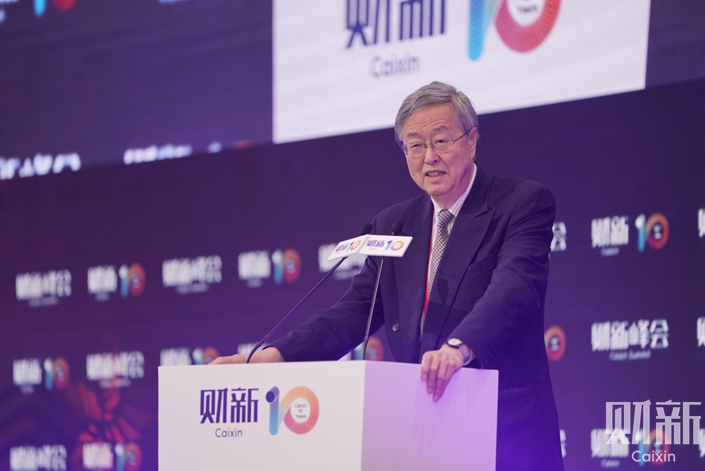 The world’s central banks need to step up coordination and cooperation in the face of challenges that include the rise of digital currencies, the impact of cross-border capital flows and the spillover effects of individual countries’ monetary policies, Zhou Xiaochuan, a former governor of the People’s Bank of China (PBOC), said Friday.

Digital currencies in particular have the potential to inflict shocks on the existing global financial infrastructure, Zhou said in a speech at the 10th Caixin Summit in Beijing. His comments came as Facebook Inc.’s proposal to launch a global blockchain-based digital currency, Libra, has raised concerns among monetary authorities around the world about the risks it could pose to the financial sector in many countries. China is also likely to be the first country to introduce a state-backed digital currency.

“Some may say that there is already a framework for strengthening coordination and cooperation between central banks in the world, but I think that actually there is not,” said Zhou, 71, the PBOC’s longest-serving governor. He retired in 2018 after more than 15 years in the job and is currently president of the China Society for Finance and Banking, a PBOC-managed financial research institution.

Zhou listed several shortcomings in the mechanisms that currently exist. The International Monetary and Financial Committee of the International Monetary Fund (IMF) — which provides strategic direction for the policies of the fund — is mainly made up of finance ministers, he said. While it plays a major role in financial stability, handling financial crises, and rescues, it lacks input from central banks.

Although the Bank for International Settlements — a global financial institution that serves as a sort of central bank for central banks — provides a communication platform for monetary authorities, it lacks a coordination mechanism and enforcement capabilities.

The Financial Stability Board — an international body that monitors the world’s financial system — can coordinate central banks’ functions in terms of financial stability to a large extent, but its role in monetary policy coordination and financial infrastructure management is still inadequate.

Zhou said he is not optimistic about improving coordination in the short term, noting that the spirit of cooperation apparent during the global financial crisis that began in 2008 is now lacking. “This is something that deserves concern,” he said.

It would be easier to strengthen coordination among central banks if voices for multilateralism were strong, but they are not, he said.

“Currently due to trade friction, among other problems, multilateralism faces challenges, and we could even say it’s going downhill,” he said, adding that there is still a long way to go to push forward coordination among the world’s monetary authorities.

Zhou highlighted three reasons why there is a growing need for a mechanism to enhance coordination and cooperation.

One is the recent emergence of digital currencies. Most digital currencies were initially designed to address weaknesses in global financial infrastructure, especially in cross-border payments, in a bid to improve efficiency and reduce obstacles through new technology, he said. But they have also triggered debate about how they should be managed and what role central banks should play.

Another key issue is the spillover effects of monetary policy on other countries, Zhou said, giving as examples the impact on the rest of the world of the U.S. Federal Reserve’s unwinding of its quantitative easing program introduced to fight the global financial crisis, and its subsequent cycle of interest-rate increases which has now given way to a cycle of cuts.

Zhou also highlighted the problem of capital flows between countries. In the past, the IMF was reluctant to support countries putting up obstacles to capital flows because it wanted to improve the efficiency of global resource allocation. However, since the global financial crisis, some at the IMF have reconsidered this stance in the face of more frequent cross-border trade and investment amid increasing global connectivity, as well as growing dependence of some emerging economies on the U.S. dollar.