By Niu Mujiangqu and Yang Ge 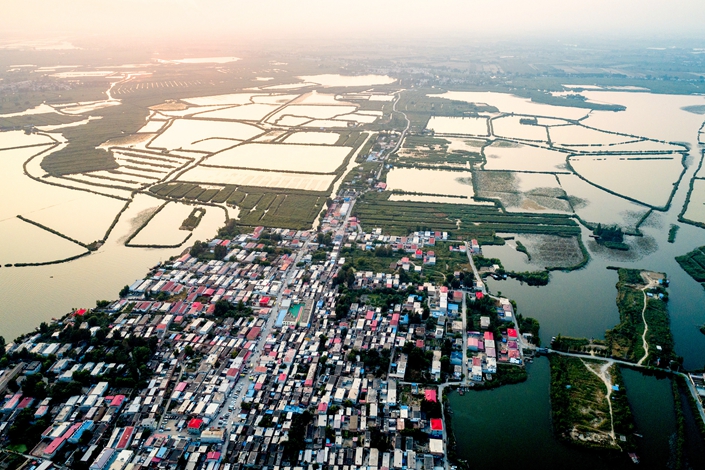 Xiongan New Area has held the first auction of local land since its establishment in April 2017, marking a major new step in its development as an alternative urban center to congested Beijing.

An investment and development arm of China Xiongan Group won the bidding through a competitive registration process, according to a public announcement on one of the area’s websites for public resources trading. Its winning 3 billion yuan ($428 million) bid will give it the rights to develop a 217,000-square-meter parcel in Xiongan’s Rongcheng county.

The winning bidder is fully owned by the provincial government of Hebei, which is where Xiongan is located about 100 kilometers southwest of Beijing. The area will eventually be linked with the nation’s capital via a high-speed rail link. It is also accessible to the newly opened Daxing International Airport, which will serve as the hub for recently formed Xiongan Airlines.

The central government first announced its intent to develop Xiongan as a major new metropolitan center in early 2017, aiming to position it as an alternate to Beijing. The announcement immediately sparked a wave of real estate speculation, as buyers scrambled for a piece of what could become China’s next mega urban center following in the footsteps of the likes of the southern boomtown of Shenzhen and Shanghai’s Pudong New Area.

That rush prompted the local government to quickly squelch such buying, and no signals of easing of that policy had emerged in the two and a half years since the zone’s official formation. A trip to the area by a Caixin reporter shortly after an early trading ban on existing homes revealed that work on all new urban and rural housing projects had been suspended, and all sales offices closed.

Stringent conditions were applied when the land was listed, including a clear statement that joint bidding wasn’t allowed. In addition, only domestically registered businesses were allowed to apply, and all bidders needed to pay a 1.5 billion yuan advance deposit.