China Delivery Firms Slash Margins to Hold On to Customers

By Isabelle Li and Jia Tianqiong 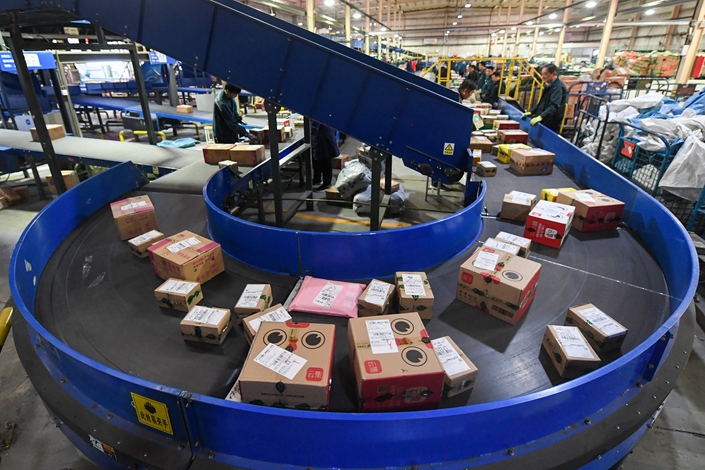 Facing growing pressure as the industry consolidates, delivery companies have opted to sacrifice margins on deliveries to boost growth as they seek to wrestle market share away from the competition.

For SF Holding Co. Ltd., YTO Express Group Co. Ltd., STO Express Co. Ltd. and Yunda Holding Co. Ltd., monthly average revenue per parcel fell 6.18%, 9.84%, 8.8% and 0.9% respectively from the second to the third quarter, according to Caixin’s calculations based on the companies’ monthly statements about their operations.

ZTO Express Co. Ltd. said in its third-quarter earnings statement that its revenue per parcel plunged as much as 13.2% year-on-year, as the company had to continue to give its customers heavy discounts to fend off rabid competitors.

What is less clear is how the strategy has affected each company’s bottom line. For Nasdaq-listed ZTO Express, which this week became the last major express delivery company to release its third-quarter earnings, profits grew. Shanghai-listed YTO Express and SF Holding, which runs industry leader SF Express, also posted higher third-quarter profits. SF Holding especially stood out for its net profit growth, which surged 54.01% from the previous year.

However, others have struggled to maintain profits, for a variety of reasons. Shenzhen-listed STO Express’ net profit plunged 63.23%. Shenzhen-listed Yunda Holding’s fell 32.81%. And New York-listed Best Inc., the parent company of Best Express, saw its net loss narrow by 86.9% to 6.7 million yuan ($953,400).

China’s express delivery industry has grown even more concentrated over the first three quarters of this year, according to data compiled by the State Post Bureau for the period. As of the end of the third quarter, the six top players control 82% of the market, according to its report (link in Chinese), reflecting a business that now favors larger players that can keep costs down.

However, express delivery firms have already begun to ease up on the discounts in the fourth quarter, which is the industry’s busy season thanks to the annual “Double 11” shopping extravaganza, which generated hundreds of billions of yuan in sales on Nov. 11. The October data from SF Holding, YTO Express and STO Express’ individual business briefings suggest that their revenue-per-parcel metrics have inched up from the previous month, though still down from October 2018.