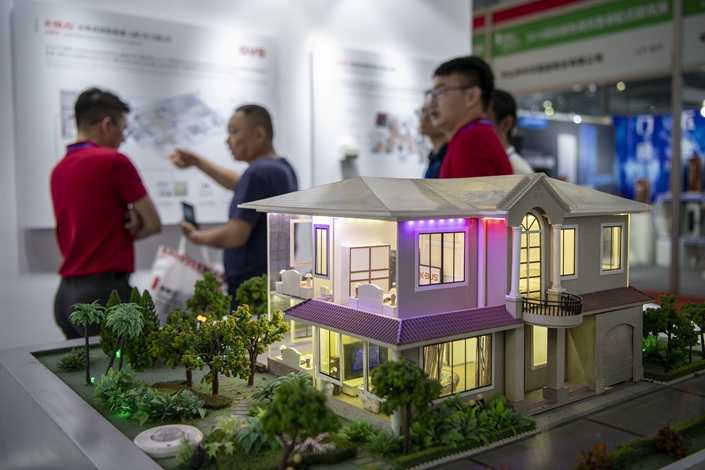 A housing expo in Shenzhen in August. Photo: VCG

Even as China loosens credit to bolster slowing economic growth, it is continuing to tighten control over the real estate sector.

Shenzhen branches of two of the “big four” state-owned commercial banks halted mortgage lending to homebuyers in mid-November, Caixin learned. The booming southern city Shenzhen, with a population of more than 13 million, borders Hong Kong and is one of China’s most prominent financial and industrial centers.

Since Nov. 18, China Construction Bank stopped granting any new mortgage loans in Shenzhen, a senior real estate industry participant told Caixin. Bank of China has taken a similar move. In Shenzhen, China Construction Bank is usually considered a bellwether for other banks, a person from the Shenzhen branch of a joint-stock bank told Caixin. He said his bank is also considering suspending mortgage loans.

Banks are caught between the year-end depletion of quotas covering household credit imposed by the central bank and pressure from so-called “window guidance” from the central bank and local banking regulators to curb real estate-related credits, multiple bankers told Caixin. Banks must wait until Jan. 1 to tap their 2020 mortgage loan quotas.

The growth of mid-to-long-term household loans in Shenzhen, mostly mortgages, has been declining for three consecutive months since August, data from the Shenzhen branch of the central bank shows.

To meet goals for inclusive finance loans, which serve underbanked households, banks usually use individual business loans and consumer loans to reach the threshold set by the central bank, which would also squeeze the quota for mortgage loans.

Meanwhile, the central bank lowered the benchmark interest rates used by lenders to price loans last week as part of efforts to shore up the economy, but mortgage rates aren’t expected to decline.

Last Wednesday, the central bank cut both one-year and five-year-plus national loan prime rates (LPR) by five basis points, or 0.05 of a percentage point. The five-year-plus LPR is a reference for loans with maturities of longer than five years, which includes mortgage rates.

Through an industry interest rate self-discipline mechanism, the central bank has fixed the minimum mortgage rate for Shenzhen’s second-home buyers at 5.45%, according to a source in the banking industry.

Caixin learned from people at several big banks that they would keep their mortgage rates flat after the LPR cut.

Since July, the country’s first- and second-home mortgage rates have climbed for four consecutive months to 5.52% and 5.84%. Analysts said they expect the rates are more likely to rise than decline in November and December.