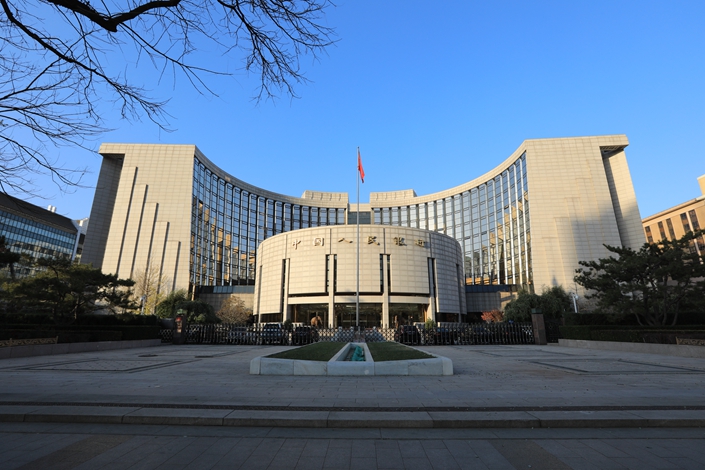 The headquarters of the People's Bank of China in Beijing on Nov. 19. Photo: IC Photo

China’s central bank announced lower interest rates for new benchmarks used by lenders to price their loans on Wednesday, marking the third time this month that borrowing costs have come down as policymakers take cautious steps to shore up flagging economic growth.

The five basis-point reduction in both the one-year and five-year-plus national loan prime rate (LPR) was widely expected by the markets after the People’s Bank of China (PBOC) shaved five basis points off the rate it charges banks to borrow under its medium-term lending facility (MLF) on Nov. 5 and cut the same amount from the interest rate on seven-day reverse repurchase agreements on Nov. 18.

The central bank announces the national LPR on the 20th of every month and the rate is determined by submissions from 18 commercial banks of their own internal LPRs. The one-year national LPR now stands at 4.15% and the five-year-plus national LPR is 4.8%, according to data from the China National Interbank Funding Center, an entity under the PBOC.

This is the first time the five-year-plus LPR has moved lower since the central bank announced a revamp of its system for setting interest rates for bank loans in August. The change saw the old one-year benchmark bank lending rates replaced by the national LPRs as part of a broader overhaul of its interest-rate system aimed at giving the market more say in deciding loan rates and lowering borrowing costs. The five-year-plus LPR is a reference for loans with maturities of longer than five years, which includes mortgage rates. The one-year national LPR fell for the second time, following a five basis-point cut in September.

Analysts were expecting Wednesday’s change after the central bank earlier in the month cut the rate on its one-year MLF, a rate banks use as a reference to set their own LPRs.

China’s policymakers have pledged to lower borrowing costs for companies serving the real economy to support growth as the country heads for its weakest economic expansion in 29 years. Gross domestic product will increase by 6.1% this year, according to the median forecast in a Bloomberg News survey of economists, down from 6.6% in 2018 and the least since 1990.

Major economic indicators posted a worse-than-expected performance in October and new lending for the month was at an almost two-year low as demand for credit among companies turned sluggish despite efforts by policymakers to stimulate borrowing. In a statement (link in Chinese) Tuesday summarizing a meeting Governor Yi Gang held with bankers, the PBOC said there was still downward pressure on credit growth.

But average interest rates are not coming down across the board, central bank data show. The weighted average rate for “general loans” — a measure of banks’ loans to firms — was 5.96% at the end of September, 0.02 percentage points higher than at the end of June. The weighted average interest rate for financing through selling commercial paper, which carries shorter maturity and is often used by small businesses, fell to 3.33% at the end of September from 3.64% in June.

Although Premier Li Keqiang and Governor Yi have pledged there will be no “flood-like stimulus” in order to avoid stoking the country’s debt burden even further, the PBOC has pumped money into the interbank market, which oils the daily wheels of the financial system, to ensure it has enough liquidity and lowered commercial banks’ cost of borrowing from the central bank via the MLF and reverse-repo agreements to encourage them to pass on the reduction to their customers, especially the corporate sector.

Yi said regulators and banks should give “full play” to the LPR as a reference for guiding interest rates and urged lenders to use it to price their loans so as to lower borrowing costs, according to Tuesday’s PBOC statement. The central bank’s third-quarter monetary policy implementation report issued on Saturday showed that in September 46.8% of new loans were priced based on the LPR. Banking industry executives have told Caixin that many lenders have not yet finished changing their internal systems and pricing mechanisms.