China and Japan Should Promote Use of Own Currencies Amid Global Trade Friction, PBOC Official Says 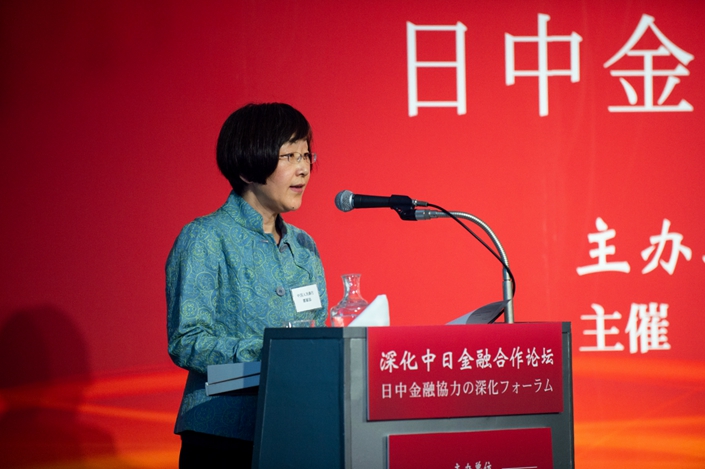 Huo Yingli, director of the macroprudential policy bureau of the People’s Bank of China, speaks to a forum in Tokyo on Nov. 28. Photo: Bank of China

(Tokyo) — China and Japan should encourage more use of their local currencies in settlements of bilateral trade and investment, as global trade friction has increased volatility in foreign exchange markets and the cost of using third-party currencies, a Chinese central bank official said Thursday.

Promoting local currency settlements in trade and investment could not only allow businesses to better manage exchange rate risks and save exchange costs, but also help broaden investors’ financing channels and diversify their investment portfolios, Huo Yingli, director of the macroprudential policy bureau of the People’s Bank of China (PBOC), told a forum in Tokyo.

Her remarks come amid an ongoing thaw between the two largest economies in Asia which started last year, the 40th anniversary of the signing of their peace and friendship treaty.

There is currently great potential for local currency settlements between China and Japan due to their close economic and trade ties and continuing high-level official communication, Huo said. While China is Japan’s largest trading partner, Japan is China’s second largest trading partner and its largest source of foreign investment, she added.

In 2017, the two neighboring countries’ annual bilateral trade exceeded $300 billion, and rose to nearly $328 billion the next year, according to Chinese customs data (link in Chinese). In addition, Japan is the only country with a cumulative investment of more than $100 billion in China. The amount had reached $113.7 billion as of May, according to data (link in Chinese) from China’s Ministry of Commerce.

At the market level, cross-border yuan receipts and payments between China and Japan have been on the rise, up 7% year-on-year to nearly 500 billion yuan ($71.2 billion) in the first 10 months of this year, Huo said.

At a policy level, Huo said that China and Japan’s monetary cooperation had achieved good results. She cited as an example the bilateral local currency swap agreement signed by the PBOC and its Japanese counterpart during Abe’s visit to Beijing in October 2018 which marked another milestone in their cooperation.

The two monetary authorities launched a bilateral currency swap agreement in 2002 and renewed it (link in Chinese) five years later. It reportedly (link in Chinese) expired in September 2013 as China and Japan’s relations deteriorated over territorial disputes.

In Asia, bilateral currency swap arrangements date back to May 2000 when financial authorities in China, Japan, South Korea and the 10 countries of the Association of Southeast Asian Nations launched the Chiang Mai Initiative in that northern Thailand city. The initiative, as a response to the 1997 Asian financial crisis, aimed to build a network of bilateral currency swaps in a bid to better manage liquidity shortage problems in the region.