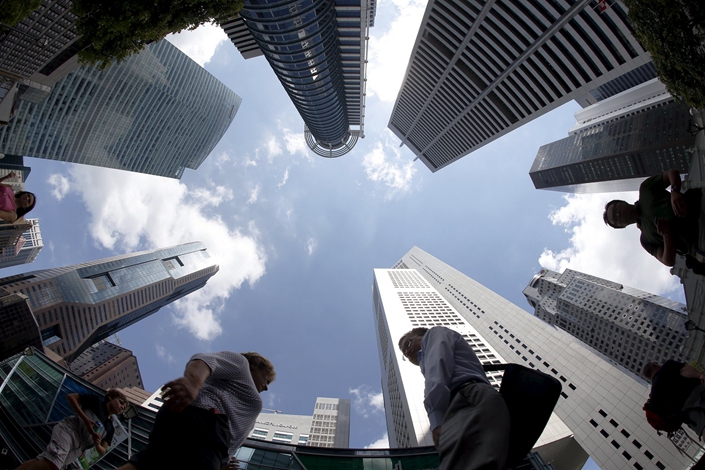 Singapore hasn’t seen this much money deposited into its banks from outside the country since early 2016, official data showed, highlighting the ongoing flow of capital into the Asian financial hub amid global geopolitical uncertainties.

Singapore’s domestic banking units had recorded about S$49.76 billion ($36.35 billion) in deposits from people outside the Southeast Asian country as of the end of October. The figure was the highest since February 2016, according to preliminary data released last week by the Monetary Authority of Singapore (MAS), the country’s central bank.

Such deposits — which include deposits from people with permanent or registered addresses outside Singapore, companies registered abroad, and overseas branches of Singapore-registered companies — have been expanding month-on-month since April, the data shows.

The flow of capital into Singapore’s banking system comes amid global geopolitical uncertainties — the pending Brexit, unclear prospects of China-U.S. trade talks, as well as the ongoing social unrest in Hong Kong that started in June. The U.S. last week signed into law the Hong Kong Human Rights and Democracy Act, which could hurt the city’s special status in terms of tariffs.

Total foreign currency deposits recorded by Singapore’s domestic banking units have also been on the rise. At the end of October, the deposits totaled S$15.47 billion, much more than October 2018’s S$8.44 billion and the highest since 1991, the earliest year of the MAS data series.

In the first half of this year, foreign currency deposits in Singapore were between S$7 billion and S$8 billion at the end of each month. At the end of July, they soared around 44% month-on-month to S$11.18 billion, and have climbed gradually since.

Hong Kong’s wealth management industry has seen some clients transferring funds from the city to Singapore, Caixin previously reported. However, that didn’t affect Hong Kong’s banking system as opposed to Singapore’s. At the end of October, total Hong Kong dollar deposits expanded by 0.4% from a month earlier to HK$6.91 trillion ($883 billion), the second straight month of an increase, official data shows.

Read more
In Depth: The Rise and Fall of Asian Twin Cities

The Hong Kong Monetary Authority has said earlier that Hong Kong hasn’t seen a clear sign of capital outflows and that money transfers by individuals are common. The MAS also said that there hasn’t been much capital inflow from Hong Kong, and that sources of Singapore’s deposits from residents outside the country cover various regions.

Hong Kong’s social unrest has pushed some capital to move to Singapore, Ravi Menon, the MAS’s managing director, said earlier, according to Bloomberg. However, he added that the disruptions in Hong Kong are not helpful for the whole region’s economies.

Singapore’s Prime Minister Lee Hsien Loong expressed similar concerns. “We thrive best in Singapore when the region is stable,” Lee said in October at the Forbes Global CEO Conference in Singapore, adding that “we don’t hope for” businesses moving from Hong Kong to Singapore.