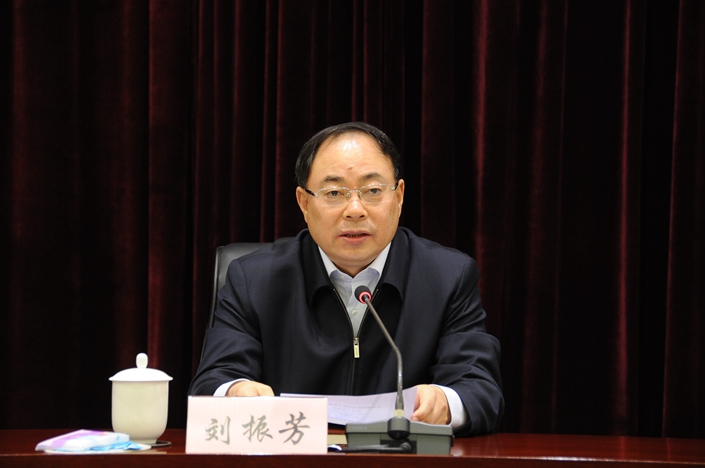 A top executive from China’s national rail operator has been named to head the government’s main rail agency, in a type of move often seen in the nation’s state-run sector.

The move will see Liu Zhenfang take over as director of the National Railway Administration, according to a Tuesday announcement on the Ministry of Human Resources and Social Security’s website. The transfer was likely in the works since last month, based on similar moves by Liu in November within rail-related units within the Communist Party. Such concurrent moves are common in China’s major government and state-run enterprises, where top leaders are nearly always Communist Party members.

Before Liu’s appointment, the position heading the National Railway Administration had been vacant for nearly a year.

At age 58, Liu is a native of North China’s Hebei province, and graduated from Beijing Jiaotong University in 1983 as a specialist in mechanical locomotive electric drives. Since then he has spent his entire career in various rail-related agencies, a common career path for graduates who specialized in big traditional industries dominated by state-run companies such as telecom, energy and banking.

Liu spent most of his earlier career working in various regional rail offices around China, before landing in his most recent job as deputy general director of China State Railway Group Co. Ltd., also known as China Railway. China Railway was established in 2013 as part of a major overhaul that saw China’s former rail ministry split up between government- and business-related parts.

China Railway was the main corporate spinoff of that split, and operates the nation’s vast rail network, including its state-of-the-art high-speed rail system. Since then the debt-heavy company has been working hard to become more commercial, and is currently in the process of making an IPO for its profitable Beijing-Shanghai high-speed rail line.

The National Railway Administration was part of the former rail ministry that remained in the government, and has been folded into the Ministry of Transport. Movement of officials like Liu between major state-owned enterprises and their related regulators is common in practice in China, reflecting a past when such entities all fell under the same agency in the earlier planned-economy era.