By Bai Yujie and Tang Ziyi 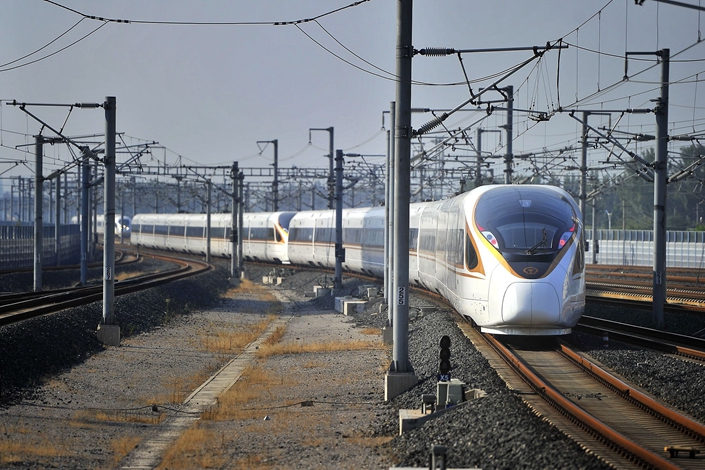 Established in 2008, the Beijing-Shanghai high-speed railway is one of few Chinese lines to turn a profit. Photo: VCG

Regulators have granted the operator of the Beijing-Shanghai high speed railway approval for a Shanghai IPO, as its debt-ridden parent China Railway Group Ltd. (CR) looks to raise money from one of its few profitable lines.

The China Securities Regulatory Commission on Thursday approved the listing plan of Beijing-Shanghai High-Speed Railway Co. Ltd., according to a statement (link in Chinese) released on the regulator’s website.

The company plans (link in Chinese) to offer 15% of its total shares and use the proceeds to buy railway projects in East China’s province of Anhui, it said in its prospectus.

Established in 2008, the Beijing-Shanghai high-speed railway is one of few Chinese lines to turn a profit. It moved 192 million passengers in 2018 — around 6% of all the passengers who traveled by high-speed rail in China that year. As of the end of September, the operator had booked a profit of 9.5 billion yuan ($1.35 billion) on revenue of 25 billion yuan.

China’s national railway operator has been seeking outside funding to pay for its massive debts accumulated after years of frenzied investment in expanding the country’s networks. As of the end of September, CR reported a debt of 5.4 trillion yuan with a debt-to-equity ratio of 65.52%.

CR is the largest shareholder of Beijing-Shanghai High-Speed Railway with a 49.76% stake, while Ping An Asset Management Co. Ltd. holds an 11.44% stake and China Social Security Fund holds a 7.15% stake, according to the prospectus.

A source close to CR previously told Caixin that the company planned to use the unit as a pilot project to push forward its “asset securitization” plan amid Beijing’s national deleveraging campaign to reduce corporate debt.

But the latest capital injection will be just a drop in the ocean, especially given shareholders will divide up the proceeds, Zhao Jian, a transport expert at Beijing Jiaotong University’s School of Economics and Management, previously told Caixin.