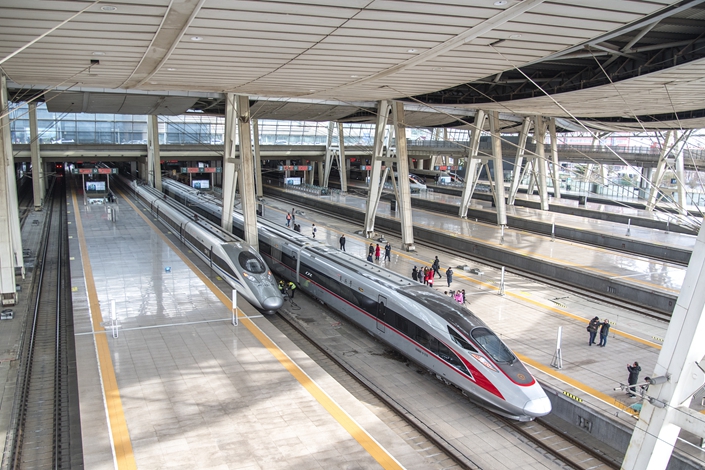 China Railway Group Ltd. (CR) has submitted an initial public offering (IPO) for its lucrative Beijing-Shanghai high-speed railway unit, as the debt-ridden national rail operator looks to raise money from one of its few profitable lines.

Beijing-Shanghai High-Speed Railway Co. Ltd., of which CR holds a controlling stake, submitted its plan to China’s securities regulator on Oct. 22, according to information on the commission’s website. Details of the plan have not been disclosed.

China Railway has been preparing for what could become one of the year’s biggest listings since at least early 2019, announcing in February it had hired an official institutional adviser to manage the line’s stock market debut.

The regulator must now decide whether to actually allow the listing. But the plan is likely to go ahead given the railway line’s strong business performance driven by a high seat occupancy rate, said Zhao Jian, a transport expert at Beijing Jiaotong University’s School of Economics and Management.

The Beijing-Shanghai High-Speed Railway recorded a net profit of 13.6 billion yuan ($1.92 billion) on revenue of 31.2 billion yuan last year, up from a profit of 12.7 billion yuan the year before. The line’s occupancy rate increased to 78% in June, up from 66% when it opened in 2011, according to figures from the state-run Xinhua News Agency.

The rail line is one of the country’s few high-speed routes to turn a profit. But it’s just the latest time China’s state-owned railway behemoth has sought outside funding after burning through cash to build the country’s railway networks. In June CR reported total debts of 5.29 trillion yuan and a debt-to-equity ratio of 65.47%.

The latest capital injection will be just a drop in the ocean in comparison, said Zhao, especially given shareholders will divide up the proceeds.

This month Kuwait’s sovereign wealth fund became the first foreign investor in China’s high-speed rail network, the construction of which has run to hundreds of billions of dollars, when it pumped $200 million into a $337 million fund that will finance a 300-kilometer (186 mile) line from Jinan to Qingdao.

Mo Yelin contributed to the report