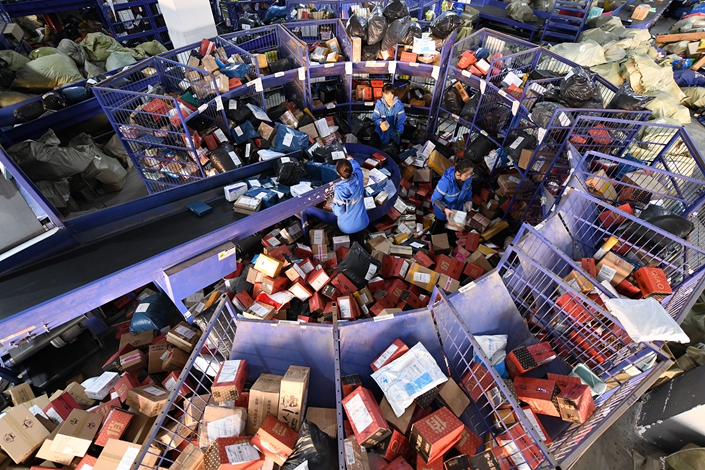 The huge figures represent the confluence of China’s embrace of e-commerce, which is rapidly leap-frogging traditional retail, and the clout of industry giant Alibaba Group Holding Ltd., which first launched the “Double 11” event a decade ago. Set on a day also known as “Singles Day” due to the four “1”s in the numeric date 11-11, the date has been embraced by online shoppers who often start their buying binges just after the stroke of midnight to get the best deals.

Some 2.31 billion packages — approaching two for every person in China — were processed during the Double 11 period from Nov. 11 to Nov. 16, according to data released on Wednesday by the State Post Bureau. Those packages contained merchandise with total value of more than 990 billion yuan ($140 billion), up more than 130 billion yuan from a year earlier.

Alibaba and rival JD.com Inc., the industry’s two largest players, saw a combined total of nearly 500 billion worth of merchandise sold over their various platforms during the shopping festival alone. Both companies reported increases of between 25% and 30% over last year’s totals.

The rapid rise of e-commerce has spawned an equally sophisticated complex for delivering those billions of packages, comprised of more than 300,000 vehicles, 116 cargo planes, about 1,000 high-speed trains and 450 ordinary trains during the latest festival, the report said. The delivery team also included 400,000 temporary workers.

It took such couriers just 2.4 days to deliver 100 million packages from online store to buyer during the festival — down sharply from the nine days it took to reach that milestone in 2013, the report said. Many of the biggest names like SF Express now offer same-day delivery, amid stiff competition that has led to big price wars this year.

Revenue per parcel has been falling steadily for most companies in that battle, including a 2.24% quarter-on-quarter decline in revenue per parcel in this year’s third quarter, according to an analysis by Industrial Securities Co. Ltd.

For SF Holding Co. Ltd., YTO Express Group Co. Ltd., STO Express Co. Ltd. and Yunda Holding Co. Ltd., monthly average revenue per parcel fell 6.18%, 9.84%, 8.8% and 0.9% respectively from the second to the third quarter, according to Caixin’s calculations based on the companies’ monthly statements about their operations.