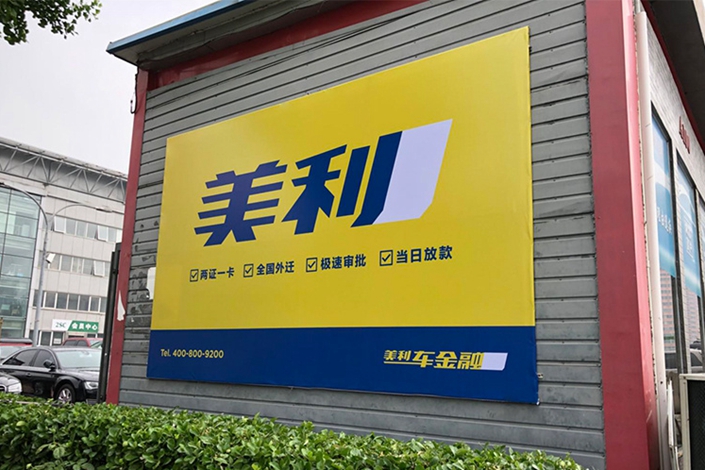 Caixin has learned from multiple sources that Meili Finance’s credit loan chief, Ma Xin; its debt collection head, Qiao Mu; and its chief risk manager, Zheng Weixi had all assisted with the investigation. Police also called in Liu Yannan, a founder of Meili Finance and Meili Auto and a former peer-to-peer (P2P) lending entrepreneur, to help with the investigation just as he was meeting with potential investors on a roadshow ahead of Meili Auto’s planned IPO. The company filed for an IPO with the U.S. Securities and Exchange Commission in October, according to its preliminary prospectus.

China has been clamping down on illegal fintech for more than a year, and lately authorities have focused on predatory lending, a practice in which unscrupulous lenders use various means to deceive or coerce borrowers to take out loans they don’t need or can’t afford and that carry unfair or abusive terms. To find customers and control lending risks, the online lenders leverage data that’s been collected illegally and pay for support services from companies that provide technology, data and payment solutions.

Police found that Meili Finance used at least 10 loan apps it controlled to ask borrowers behind on payments to take out new loans, creating a vicious cycle of debt that became difficult to escape, the sources said. Police have also received many complaints connected to Meili Finance.

The data sources that Meili Finance used for risk management might also be problematic, industry sources said. Tongdun Technology Co. Ltd., which has been targeted by the police, has said in public promotions that Meili Finance was a client that used its data scraping service.

Big data companies engaged in data gathering, mining and analysis have mushroomed in China since 2013, coinciding with a boom in the internet finance industry that had a voracious appetite for information on customers.

Police have cracked down on a group of data companies that had been providing technology or data services for loan sharks, the public security ministry said at a briefing in Beijing last month.

The police believe predatory lenders and loan sharks obtained personal information of borrowers to help with collection of unpaid debts. The lenders employed the services of technology and big data companies that automatically scour the internet to collect data, including personal information like names, locations, phone numbers and email addresses.

Unscrupulous and shadowy online lending platforms also use the data for risk management to identify fraudulent borrowers, and for marketing their loans. They often set up “traps” that target young people who can’t live on their income and lure them by offering unsecured loans, the public security ministry said at the briefing.