Grounding of Boeing Max Dries up $300,000 Pilot Jobs in China 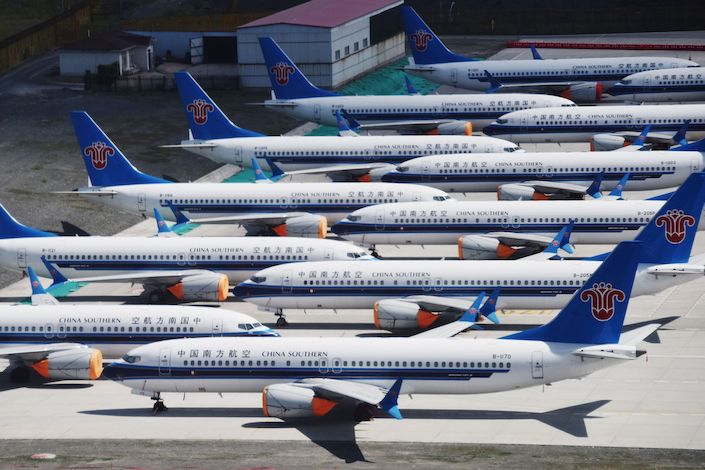 China was the first major jurisdiction to ground the Max plane since March after two fatal crashes. Photo: Bloomberg

(Bloomberg) — Expatriate pilots flying Boeing Co.’s most popular plane for Chinese airlines used to be able to take their pick from dozens of jobs paying $300,000 plus perks thanks to a shortage of experienced aviators. The grounding of the 737 Max changed that.

Chinese carriers have largely stopped hiring foreign pilots for Boeing’s main narrow-bodied jet, nine months after two crashes led to the grounding of the best-selling 737 Max, according to recruitment agencies. Airlines in China’s booming aviation market had among the most enthusiastic buyers of the plane, accounting for 20% of a global fleet that now sits idle.

Chinese airlines still pay above-market wages, but the lengthy grounding has hit a swath of roles paying multiple times the median salary of a commercial pilot in the U.S. With no clear timeline for the Max’s reinstatement after two lethal crashes, demand for expat pilots of any 737 variant in China has slowed to a trickle. Only a handful of the country’s airlines are recruiting for such jobs now.

“We’ve seen airlines suspend recruitment of 737 pilots, period,” said Andre Allard, founder and president of AeroPersonnel Global Inc., a Montreal-based pilot-recruitment agency that has worked in China since 2007. “Many of these airlines had the Max on order. That evidently changed their plans.”

China’s growing middle class has put the country on track to be the world’s biggest aviation market in the next decade. For many local airlines, short-haul workhorses like the 737 became the aircraft of choice in the travel frenzy. But China has long struggled to produce enough pilots on its own. By the end of 2016, Chinese carriers had more than 1,000 foreigners in their cockpits, double the number in 2010.

The decline in demand for foreign 737 pilots leaves many of the world’s best-paid flying jobs, which come with a suite of perks such as signing bonuses, education allowances and free flights, to foreign Airbus skippers to try their hand in China.

Boeing is under intense scrutiny following the two disasters that killed 346 people. In October last year, a Lion Air flight plunged into the sea shortly after taking off from Jakarta, and in March an Ethiopian Airlines jet crashed near Addis Ababa.

It’s not just those Max tragedies weighing on the sector. Growth of China’s economy is slowing, and the country is locked in a trade war with the U.S. that’s into its second year. As an American aerospace manufacturer, Chicago-based Boeing has found itself in the middle of the dispute.

China was the first major jurisdiction to ground the Max plane, which has been banned from flying since March as Boeing tries to fix a flight-control system implicated in both crashes. The U.S. aviation regulator said in December it won’t complete the aircraft’s required approvals until 2020. Even then, the Max could take months to reach airlines. European low-cost carrier Ryanair Holdings Plc doesn’t expect deliveries before May.

Recruiter Wasinc International says the crisis at Boeing has spread to change the fortunes of aviators in China. Only seven or eight of the 28 Chinese airlines on Wasinc’s books are actually hiring pilots, said the company’s president, Dave Ross.

“Most of them are overstaffed because of the grounding of the Max,” Ross said by phone from Las Vegas. Just one or two are interested in 737 pilots, he said.

Low-cost carrier China United Airlines, a unit of China Eastern, is still in the market for pilots, offering $288,000 a year to 737 captains on three-year contracts, according to Wasinc’s website. But that’s the site’s first ad for 737 pilots in China since July. The package includes a monthly education allowance of $1,000 for children in Chinese schools.

The drought’s unlikely to end until the Max is cleared by regulators and Boeing can resume deliveries. Boeing will temporarily halt production of the Max in January, according to a person familiar with the matter. Chinese buyers have received 76 of the jets so far and are due to receive 181 more, according to data on Boeing’s website.

While there’s less immediate need for 737 pilots in China, appetite for Airbus captains is unabated. “The only airlines hiring without much change are A320 operators,” Ross said.

For example, Juneyao Airlines in Shanghai is offering $299,000 a year to A320 captains between 30 and 53 years old. The position demands an average of just 14 hours flying a week and includes 50 days of paid leave and an overseas employment allowance of $666 a month, according to Wasinc. The pay climbs to $311,000 a year — after tax —in the second term.

The Chinese airlines that are still hiring are getting pickier, said Tony Liu, a self-employed pilot agent based in Guangzhou, northwest of Hong Kong. In particular, they take a dim view of errors during flight assessments, he said.

“If you really want to work here, you have to prepare pretty good,” said Liu. “If you make some mistake in the simulator, they will be very strict.”

China has also sought to lean less on foreigners. The number of Chinese licensed commercial pilots was 61,492 at the end of 2018, according to the Civil Aviation Administration of China. That’s up 54% from 2014, but it’s still not enough. According to Boeing, China will need 8,090 new airplanes over the next 20 years, the bulk of them single-aisle aircraft — a category where Boeing’s 737 competes with Airbus’s A320.

To fly them all, China will require an additional 124,000 pilots, Boeing says. That’s the equivalent of 119 new hires a week for two decades.

All told, it’s still possible for overseas pilots to head home with $1 million in the bank after five years of flying in China, said Allard at AeroPersonnel. It’s just that Airbus captains are more in favor now, he said.

“There is huge uncertainty about the Max,” Allard said. “It seems this thing is going on and on and on.”