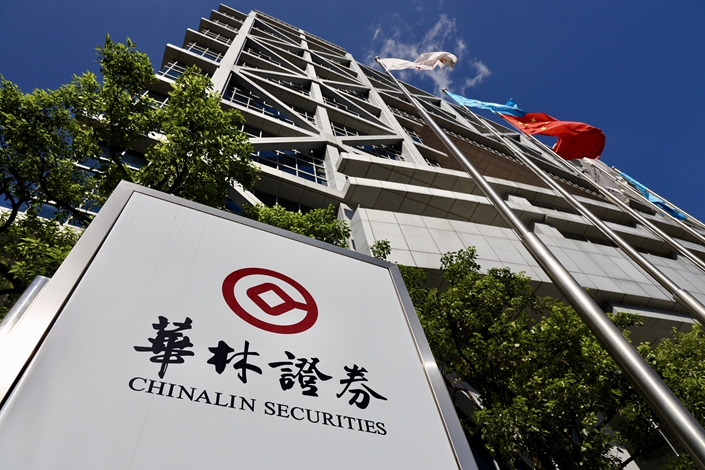 The China Securities Regulatory Commission (CSRC) told the brokerage that it has violated seven major regulations, and can only operate its business within the existing scale for three months, according to the firm’s Friday filing (link in Chinese) to the Shenzhen Stock Exchange. This is the most severe penalty recently handed out by the CSRC since November, when the regulator took over Shanghai Huaxin Securities Co. Ltd.

Listed for less than one year in Shenzhen, Chinalin Securities has already received multiple warnings from the CSRC.

Despite this, the family business has been a target of significant market speculation. On Monday, its share price closed at 14 yuan ($2 yuan), representing a price-to-earnings (PE) ratio of 109.63. The higher the ratio, the more expensive shares are perceived to be. Investors are generally prepared to pay more for companies they believe have good prospects. Chinalin Securities’ PE ratio is more than double the average for the capital market service industry, which was 42.43 on Monday, according to data (link in Chinese) from China Securities Index Co. Ltd. The capital market service industry includes securities, futures and fund firms.

According to the Friday filing, the CSRC found that the brokerage’s compliance director did not present written reviews for senior executives or their subordinate units when conducting compliance inspections, nor did the brokerage ever conduct compliance inspections of subsidiaries. Neither did it hold employees and units responsible for past violations of investment banking and asset securitization business rules, according to the filing. Also, many positions and seats on the company’s board of directors, board of supervisors and managerial team are held by people closely associated with one another, including some key positions held by one individual at the same time, the filing shows.

Chinalin Securities said in a Monday filing (link in Chinese) that it has made adjustments and completed internal rectification of the issues pointed out by the CSRC.

The brokerage received a warning (link in Chinese) from the CSRC’s Heilongjiang branch in May for poor due diligence by its asset securitization business. In August, the CSRC’s Shanghai branch also issued a warning (link in Chinese) to the firm, after finding that the former head of a Chinalin Securities department in Shanghai held multiple posts and shares in other for-profit companies. The man, surnamed Lu, had registered multiple companies to sell privately offered funds and promoted investment products with false advertising.

In the first three quarters of 2019, Chinalin Securities recorded 674.5 million yuan in revenue, down nearly 7.5% year-on-year, according to its unaudited third-quarter report (link in Chinese). Its net profit in the same period expanded 18.9% year-on-year to 305.7 million yuan.

In 2018, Chinalin Securities ranked 34th of 98 securities firms on the Chinese mainland in terms of net profit, despite being ranked 78th in terms of total assets or net assets, according to figures (link in Chinese) from the Securities Association of China, an industry organization under the supervision of the CSRC.