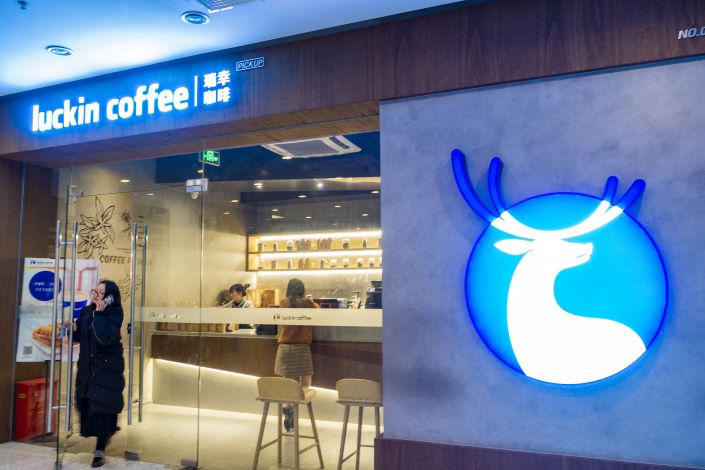 A Luckin Coffee location in Shanghai on Dec. 10.

Luckin unveiled two lines of vending machines in its latest expansion, one for its coffee products and the other serving cold beverages in partnerships with names like PepsiCo, Nestle and two of China’s biggest dairies. Luckin also disclosed that it had about 4,500 stores at the end of last year, enough to make it China’s biggest coffee chain behind Starbucks’ most recent count of 4,200.

Luckin said the vending machines will help it move beyond its traditional coffee shops that, unlike Starbucks, contain minimal seating and only sell coffee through a smartphone-based app. It said such machines could be located in a wide range of places, including office buildings, campuses, airports, bus terminals, gas stations and highway service stations.

Despite opening its first stores just two years ago, Luckin has grown at a breakneck pace to its current size. By comparison, Starbucks has been in China for two decades. But whereas Starbucks’ China operation is highly profitable, Luckin’s is still heavily money losing, partly due to the company’s rapid expansion and also its heavy reliance on promotions to attract and retain new customers.

The company reported a loss of 1.76 billion yuan ($253 million) in the first three quarters of last year, nearly double the loss from the previous year. But its revenue also grew sharply over that period, rising more than seven-fold to 2.9 billion yuan.

“With our value propositions of high quality, high affordability and high convenience, Luckin is rapidly becoming a well-recognized, trendy, mass market … brand,” said CEO Jenny Qian. “We will continue to grow both our own traffic and products, improve brand value, expand the scale of our platform, and create more value for our customers. Luckin Coffee is on track to realize our mission of being part of everyone’s life, starting with coffee.”

In separate announcements aimed at financial markets, Luckin also said it was planning to raise about $800 million through a combination of selling shares and issuing a convertible bond. It said the company and one of its major shareholders would sell 11 million of its American Depositary Shares (ADSs), which would raise about $420 million based on its latest share price. It said it would raise another $400 million through the issue of convertible notes due in 2025.

The fundraising would come just eight months after Luckin raised $560 million in an IPO last May. The quick return to market for additional funds is part of a broader trend among recently listed Chinese tech firms, some of which have raised even larger amounts through similar secondary offerings than they raised in their original IPOs.

“In some ways this is the beauty of choosing to list in the U.S. capital markets — the largest and deepest in the world,” said one person who works closely with many of the companies, speaking on condition of anonymity due company policy. “Maybe investors don’t really get or appreciate their story at IPO and some post-IPO time and more communication directly with the company could warm up investors that were on the sidelines at IPO.”