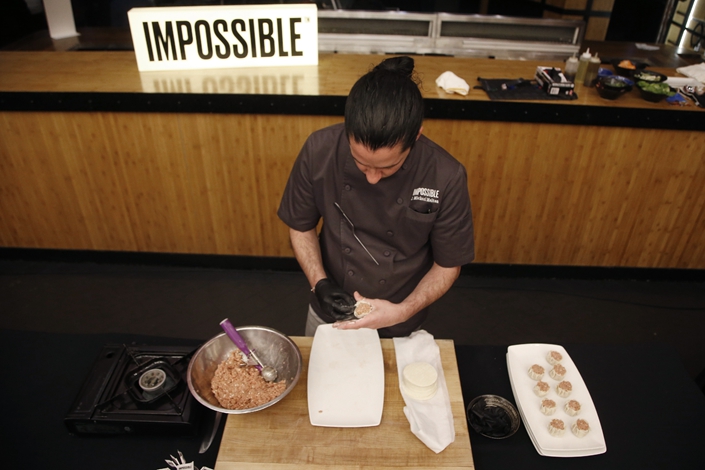 Fake meat sensation Impossible Foods Inc. is eyeing China with its latest product, Impossible Pork, in a country that consumes half the world’s production of the meat.

But the company and rival Beyond Meat face numerous obstacles in feeding the world’s most voracious pork consumer, mostly due to regulatory obstacles. That reality didn’t stop Impossible Foods from showing off a number of traditional Chinese products this week, including spicy noodles and steamed dumplings, using its new fake pork product in place of the original.

It unveiled the Impossible Pork products at a trade show taking place in Las Vegas, along with another new product, Impossible Sausage, which will make its debut later this month.

An announcement on the Impossible Pork launch was full of Chinese food references. “Impossible Pork is delicious in any ground meat dish, including spring rolls, stuffed vegetables, dumplings, wontons or sausage links,” it said. “Chefs can use Impossible Pork in recipes from stir-fry to meatballs to dim sum or links.”

Pork accounted for nearly two-thirds of consumption among four major meat types in China in 2018, nearly triple that for fowl, which was the second most popular type with 23%, according to a Changjiang Securities note, citing data from China’s Ministry of Agriculture and Rural Affairs.

Like Impossible Foods’ other products, Impossible Pork uses soy legume hemoglobin, a protein found in soy that the company says gives its products their meaty flavor.

Brown said Impossible Foods is already talking with Chinese regulators and potential business partners about localizing some production in a bid to tap local appetites. One of the biggest obstacles is regulation, since Impossible Foods’ products have to get certifications that could take years. Its products also contain a genetically modified soy molecule, and China has been wary of such altered products.

In a major move on that front, China’s Agriculture Ministry has recently indicated it is set to award safety certificates for genetically modified corn for the first time in a decade, paving the way for domestic commercial production.

Even if it ultimately gets the green light, Impossible Foods won’t be the first to supply fake pork to China. Last November, a product called Omnipork made by a Hong Kong company entered the market on Tmall, the popular online shopping mall operated by e-commerce giant Alibaba. The product also became available in some high-end restaurants in major Chinese cities. Omnipork is made from soy beans, peas, mushrooms and rice, though none are genetically modified.