By Sun Liangzi and Flynn Murphy 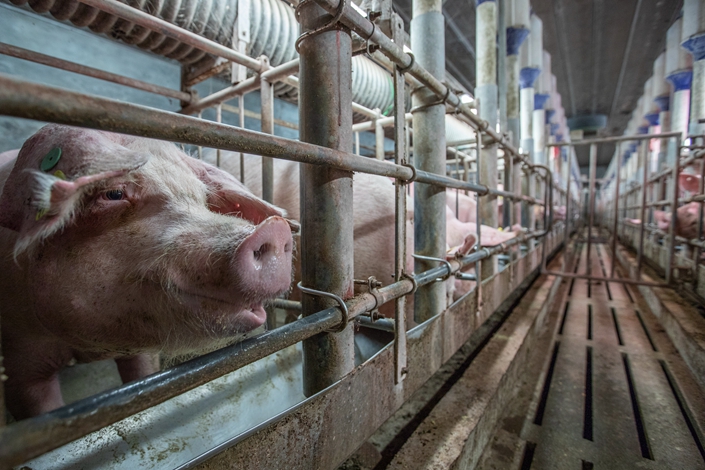 China's big hog producers have seen revenues climb as much as 45% owing to tight domestic supply on the back of the swine fever crisis.

As the African swine fever crisis that has ravaged China’s pig stocks nears its eighteenth month, a Caixin analysis of full-year earnings shows large producers are cleaning up on the back of dwindling supply.

New Hope, one of the nation’s largest pig producers, saw its annual slaughter volume decline year-on-year but the hog segment of its revenue shoot up more than 45%. That matched a handful of other industry leaders that increased their pork revenue by around half.

Analysts predict the supply gap will hit 10 million tons this year (link in Chinese), and the average price of pork will be around 30 yuan ($4.30) per kilogram.

Because the hardy African swine fever virus persists in the environment, small and midsize farmers face greater risk in raising their own pigs. Meanwhile large pig companies have announced plans to dramatically ramp up their production in coming years, aided in part by government subsidies.

Wens Foodstuffs Group Co. Ltd.’s annual hog sales totaled more than 18.5 million last year, down 16.95%. However the company expects revenue from its hog segment to come in at around 46.57% year-on-year.

Zhengbang Technology, which previously made most of its revenue from feed, saw the total income of its hog segment increase 49.25% annually to 11.4 billion yuan.

At the beginning of 2019, New Hope was aiming to produce 25 million hogs annually by 2022, up from 5 million in 2018. But more recently New Hope head Hu Ji said they were substantially ahead of schedule. Wens Foodstuffs hopes to add capacity to reach annual production of 70 million hogs by 2022.

A plan proposed by China’s Ministry of Agriculture and Rural Affairs will aim to return the country to 80% of its pre-swine fever production capacity by the end of 2020. But even if this ambitious target is achieved, the average pork price will likely remain high, analysts believe.

Food prices in China rose 17.4% year-on-year in December with pork responsible for most of the increase, according to the National Bureau of Statistics (NBS). Prices of the popular meat soared 97% year-on-year and accounting for just over half the overall CPI increase of 4.5%. But that surge was down from a year-on-year pace of 110.2% in November.

Pressure on pork supplies is easing somewhat as a result of government policies to boost imports, release reserves and encourage farmers to raise hogs. Average prices fell 5.6% in December, compared with a 3.8% rise the previous month.