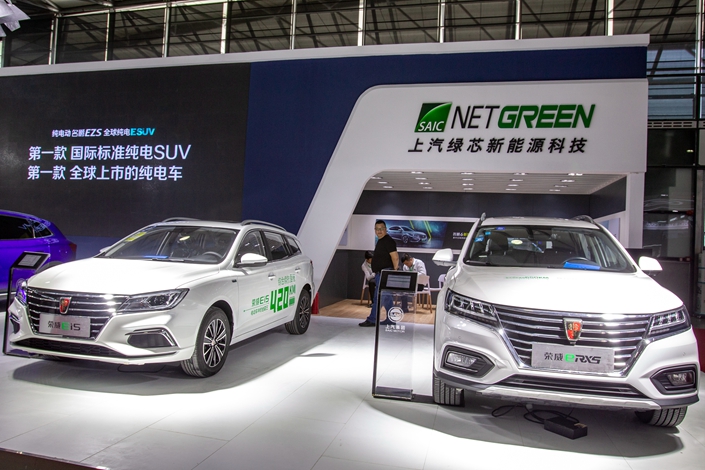 China’s top domestic carmaker’s new-energy vehicle (NEV) sales plunged by more than 40% last year after a major reduction in government subsidies, with little relief in sight as long as costs remain substantially higher than those for gasoline-powered rivals, an official said.

SAIC Motor Corp. Ltd. sold between 50,000 and 60,000 NEVs last year, compared with nearly 100,000 in 2018, Deputy Chief Engineer Zhu Jun told an industry panel on Sunday. He added that NEVs aren’t competitive enough in the market yet, and only the rapid lowering of costs will change that.

Beijing has put high priority on developing the NEV market, and previously provided generous government subsidies for both manufacturers and buyers to encourage such movement. But most incentives for manufacturers have been retired over the last few years after frequent abuse was uncovered. Buyer incentives were also reduced sharply midway through last year, resulting in a plunge in sales in the second half of 2019.

China’s NEV sales fell 27.4% in December, bringing total sales for last year to 1.2 million — down 4% from 2018, the China Association of Automobile Manufacturers reported on Monday. Declines in the second half of the year were much sharper following the change in subsidy policy that took effect July 1, with top players often reporting monthly sales declines of 50% or more.

The massive reductions have seen around three-quarters of previous subsidies eliminated, estimated Dong Yang, vice president of China EV 100, an advocacy group for new energy cars. Such reductions have forced NEV-makers to lower prices to remain competitive, with the result that margins for such cars now range between 0% and negative 5%, said SAIC Vice President Wang Xiaoqiu.

SAIC’s Zhu pointed out that the cost of making an NEV is still considerably higher than that for a comparable gasoline-powered car. He said a traditional top-tier domestic brand car could sell for around 100,000 yuan ($14,500). By comparison, a comparable NEV with driving range of 400 kilometers would sell for 150,000, he added.

The main cost behind NEVs is batteries. Chinese Academy of Sciences Academician Ouyang Minggao recently explained that power generation costs for NEVs have come down about 85% over the last few years, but still remain high. SAIC’s Zhu said battery costs will need to drop another 40% in power-per- kilowatt-hour terms before such cars become truly competitive with traditional gas-powered ones.

EVs also face a challenge from low resale values due to degradation of batteries. A study released late last year by the China Automobile Dealers Association showed that Tesla’s cars were best at retaining their value, selling for about 50% of their original price after three years. Other brands fared worse, reselling for only around 30% after the same amount of time. By comparison, the value retention rate for most traditional gas-powered cars is usually more than 60% after three years.

The plunge in China’s NEV sales during the second half of last year prompted the Ministry of Industry and Information Technology (MIIT) to hint on Saturday that subsidies would remain relatively constant this year and not be subject to another major reduction. MIIT chief Miao Wei said government subsidies will “remain relatively steady” this year in order to stabilize market expectations and guarantee the industry’s healthy development. The ministry later emphasized that no policies have been finalized yet.