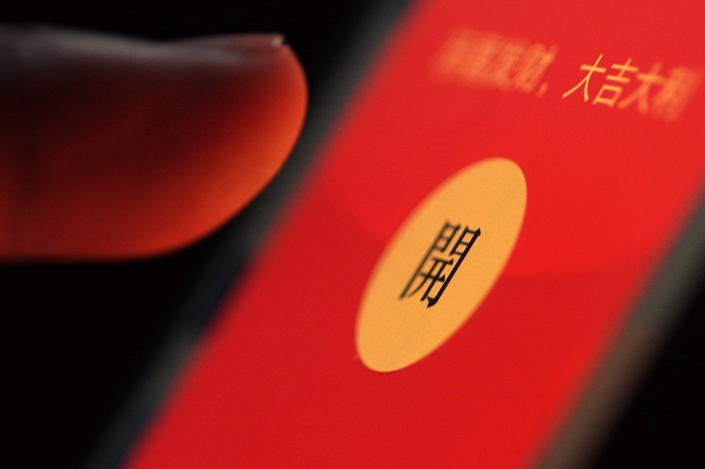 Chinese internet companies have pledged to give away at least 14.6 billion yuan in digital red envelopes over this year’s holiday season.

Chinese internet companies are once again giving away billions over the Lunar New Year holiday, piggybacking on a seasonal gift-giving tradition to boost their market share.

According to Caixin’s calculations, this year companies have pledged to give away at least 14.6 billion yuan ($2.1 billion) over the festive season, mainly in the form of digital “hongbao.” Hongbao are traditional cash-stuffed red envelopes exchanged between friends and relatives. In recent years, digital hongbao sent via mobile payment apps have becoming increasingly common.

One of the biggest spenders this year is social media giant Tencent Holdings Ltd., which said it would spend 1 billion yuan to promote its short-video service Weishi, double what it spent last year.

Weishi has been seen as Tencent’s response to the hit short-video apps operated by ByteDance Ltd., including Douyin, the domestic equivalent of TikTok. ByteDance said it would hand out 2 billion yuan in digital hongbao during the period between Jan. 14 and Jan. 31.

Another popular short-video app, Kuaishou, said that it would give away 1 billion yuan during the broadcast of this year’s Spring Festival Gala, with which it has a partnership deal this year. The annual gala has been running for decades and is watched by hundreds of millions of people. A source familiar with the matter said that the deal cost Kuaishou from 1.3 billion yuan to 1.4 billion yuan.

As of the end of June, Kuaishou had over 200 million active users, according to data provider QuestMobile. Kuaishou has said it hopes to have over 300 million users by the end of the Lunar New Year holiday this year. Sector leader Douyin has over 400 million daily active users.

Alibaba Group Holding Ltd. said it would hand out 500 million yuan to users on its mobile payment platform, Alipay. This is Alipay’s fifth year of giving away digital hongbao.

The country’s top e-commerce player also said it will hand out hongbao worth 2 billion yuan to boost the market share of its Juhuasuan e-commerce platform in China’s smaller cities and villages. This may be an attempt to meet the challenge posed by upstart Pinduoduo Inc., which has grown to become a major player in the sector by targeting lower-income users with a group-buying model.

Pinduoduo began its spending a little earlier, saying it handed out coupons worth 4 billion yuan from Dec. 20 to Jan. 15.