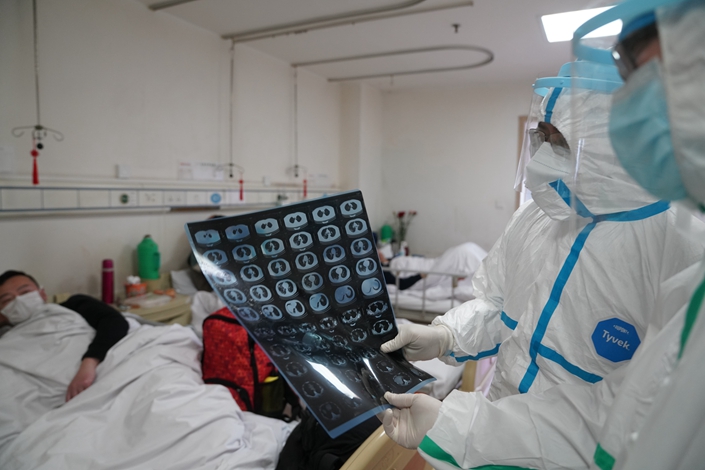 A doctor checks the X-ray of a coronavirus patient. Photo: Ding Gang/Caixin

It’s China’s festive season, but there’s little to celebrate. The country is on a wartime footing after an outbreak of viral pneumonia that has killed more than 130 people and infected more than 6,000. Thousands more still are believed to have the disease.

Airports, train stations and highways have been closed in the central Chinese city of Wuhan, the epicenter of the outbreak. Medical staff and supplies are being rushed in, but significant shortages remain on the ground, which have been further complicated by road closures and transport shutdowns.

The disease is caused by a novel coronavirus which the World Health Organization (WHO) has temporarily named “2019-nCoV.” Medical experts believe the virus is highly infectious but less deadly than severe acute respiratory syndrome (SARS). The WHO assessed the risk of the pandemic as “very high” in China and “high” at global level.

The virus has spread to every provincial-level region except the Tibet autonomous region, and to 15 countries abroad. Many countries have issued travel warnings advising their citizens not to visit China.

Here are five more things you need to know about the novel coronavirus.

How did we get here?

Hospitals in Wuhan began to admit patients who had a respiratory disease of unknown cause in December. Almost all had fever, most had a dry cough, some had fatigue, and a handful had other symptoms like headache and diarrhea. But the local health bureau did not issue a statement (link in Chinese) until Dec. 31, the same day China notified the WHO. It said the cases were linked to a market in the city which sells seafood, wild animals, and more. The market was closed the next day. The link between the virus and the market is now disputed.

On Jan. 9, a 61-year-old man surnamed Zeng became the first known person to die from the disease. The same day, state broadcaster CCTV cited (link in Chinese) medical experts who said the viral pneumonia outbreak was believed to be caused by a new kind of coronavirus.

The epidemic rated little mention in media and governments’ statements until mid-January, but the number of reported virus cases in China increased sharply after Jan 20., fueling a great deal of anxiety. That day, Zhong Nanshan, one of China’s best-known epidemiology experts, gave imprimatur to what many experts were already saying — the virus can be passed between people; and Chinese President Xi Jinping gave orders to fight against the virus.

On Thursday, Wuhan city was placed under a kind of lockdown, with public transport networks suspended and the city’s 11 million residents told to remain there. That policy has since spread to other cities in the province. Wuhan’s mayor said Sunday that over 5 million people have left the city. While it’s normal for a large number of people to migrate for the Lunar New Year holiday, people believe that some left due to virus fears.

By Wednesday noon, Chinese authorities confirmed over 6,000 cases of infection and over 100 deaths. The number of suspected cases surged to over 9,000. Foreign embassies began to mull evacuating their citizens from Hubei, even, they said, in the face of official Chinese representations that there was no need to do so.

How dangerous is the virus?

The novel coronavirus belongs to a family of viruses that include the common cold, and deadly viruses SARS and Middle East Respiratory Syndrome (MERS). Hu Bijie, a deputy head of the Shanghai Institute of Respiratory Diseases, said it was like a “sibling” of SARS.

Medical experts and authorities have confirmed that 2019-nCoV spreads efficiently. Yuen Kwok-yung, a leading Hong Kong microbiologist, observed that the person-to-person transmission can “occur in hospital and home settings with intercity spread.” He also worried about the virus’s “high attack rate in family clusters” after researchers traced a case of six of a seven-member family catching the disease after they visited Wuhan.

During the virus’s incubation period, which is thought to be up to 14 days, it can infect others, National Health Commission head Ma Xiaowei told a briefing on Sunday. “The virus seems to be getting more infectious,” he said.

While almost all the early cases presented with a fever, it now appears some people infected with the virus do not have one. That’s a problem because fever is a primary form of disease surveillance, and temperature scanners have been regularly deployed to check crowds for new cases, including at airports. It also means some patients may be spreading the virus without knowing.

Experts generally agree the novel coronavirus is not as deadly as SARS. The case fatality rate — how many people die as a proportion of how many contract the disease — was hovering around 2% to 3%, far less than that of SARS in 2003 which killed about one in ten people it infected. An editorial in “The Lancet” warned against overstating the mortality risk. “News media that worsen fears by reporting a ‘killer virus’ only harm efforts to implement a successful and safe infection control strategy,” it said.

But experts have also cautioned that this rate could change over time. Many more mild cases of the disease are likely to be discovered, they say, which would bring it down. Or it could mutate and become more deadly. Furthermore, even a low mortality rate becomes a large number of victims if a disease spreads widely.

Evidence so far suggests the virus is mainly transmitted via respiratory droplets and close contact, a statement (link in Chinese) from the Chinese Center for Disease Control and Prevention said on Tuesday.

A paper published by “Science China Life Sciences” suggested bats could be the virus’s disease reservoir — a term disease experts use to refer to the animal population where it incubates before spreading to humans. “Though it remains likely there was intermediate host(s) in the transmission cascade from bats to humans,” the paper concluded.

Was there a cover-up?

One of the main questions about the outbreak has been about the level of Chinese government transparency, particularly early on. While international experts have mostly praised the level of information sharing, particularly compared to the deadly SARS epidemic which started in late 2002 but was not reported to the WHO until the next year, more is now publicly known about the early days of the pneumonia outbreak after a peer-reviewed study of the first 41 infection cases was published in “The Lancet” on Friday.

The initial actions of the Wuhan government gave little sign that an emergency was coming. On Jan. 11, the Wuhan Municipal Health Commission said in a statement (link in Chinese) confirming the first death that “no new cases have been found since Jan. 3. No medical staff has been found infected, and no strong evidence of human-to-human transmission has been found.”

From Jan. 11 to Jan. 15, the Wuhan health bureau did not receive any new report of confirmed cases, according to its website. However, daily new cases surged from four on Jan. 16 to 60 on Jan. 20. On Jan. 21, it admitted 15 medical staff had been infected — a key threshold for any infectious disease outbreak as it proves human-to-human transmission.

However, a Caixin investigation found (link in Chinese) that medical workers were suspected of being infected with the disease as early as Jan. 5, when a doctor in Wuhan Tongji Hospital developed fever. That doctor was hospitalized on Jan. 10 due to coronavirus-caused pneumonia.

Wuhan’s mayor has admitted having delayed revealing information in the early days of the epidemic during an interview with state broadcaster CCTV, but argued that was because he was complying with China’s infectious disease prevention law. “As a local government, after we have the information, we can only reveal it after approval,” he said.

How is it being treated?

Hospitals across Hubei province are at the frontline of the battle against the virus. As infected patients and people concerned they had caught the disease flooded into hospitals over the past week, there were long waits for testing. Caixin reporters found that many patients who had symptoms of coronavirus had been unable to confirm the diagnosis because of a shortage of diagnostic kits.

Beds and medical equipment, including masks and protective clothing, have also been in short supply. Many doctors are exhausted after working continuously since the start of the outbreak.

Chinese authorities are now mobilizing thousands of medical staff nationwide to aid Hubei. Two quarantine centers are under construction in suburban Wuhan, and will provide about 2,300 beds. Factories are running at full capacity to produce supplies, though capacity is still far behind medical need, Wang Jiangping, a deputy head of the Ministry of Industry and Information Technology, said at the Sunday briefing.

Treating guidelines (link in Chinese) issued by the National Health Commission suggest the use of antivirals lopinavir and ritonavir, and warn against the inappropriate use of antibiotics. While there are vaccines and potential cures in development, treatment at this point is primarily relief of symptoms, helping patients with severe cases to breathe by hooking them up to ventilators, prescribing antibiotics to stave off a secondary infection, and managing pain.

Authorities and experts agree that there is still much not known about the virus, such as where exactly it came from and how it is changing.

How can you protect yourself?

Authorities have instructed people living in China to avoid gatherings and stay away from friends during the Lunar New Year holiday, wear face masks when outside, and to wash their hands frequently. They also warned against eating or coming into contact with wild animals.

The WHO has posted general infection control advice, recommending immediately throwing away used tissues, covering the mouth and nose when coughing or sneezing, avoiding close contact with anyone who has fever and cough, and avoiding direct unprotected contact with live animals and surfaces in contact with animals.

Hong Kong medical expert Yuen said people must do everything they can to control the epidemic until outdoor temperatures rise to 30 degrees Celsius, which will hamper the ability of the virus to survive in the environment.