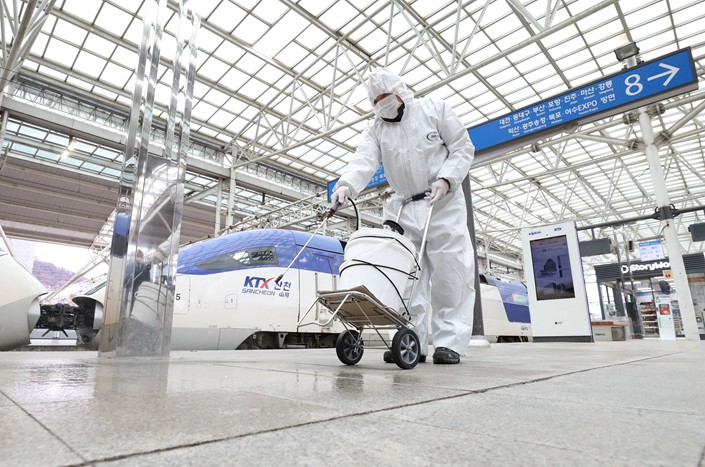 After nearly two months of fighting the new coronavirus epidemic, Chinese leaders are tentatively trying to restore a sense of normality by loosening restrictions on movement and encouraging people — albeit with difficulty — to return to work. Outside China, however, the battle is just beginning.

By Wednesday evening, some 38 countries around the world had reported a combined 2,800 cases of the virus, which causes a pneumonia-like disease known as Covid-19. Some of the worst-hit nations are China’s neighbors in East and Southeast Asia, with South Korea reporting (link in Korean) more than 1,200 cases and 12 deaths, Japan logging (link in Japanese) more than 850 cases and four deaths — including infections on the stricken Diamond Princess cruise ship — and Singapore reporting 91 cases. Nobody in Singapore has yet died from the disease.

Rising overseas case counts and WHO warnings that the world is unprepared for a global pandemic have drawn questions over the capacity of governments and healthcare systems outside China to effectively respond to Covid-19 outbreaks. While the world’s most populous country reacted by locking down cities, temporarily shuttering businesses, and severely curtailing travel, its response has been hampered by overburdened hospitals, shortages of medical supplies, and economic pain.

While South Korea, Japan, and Singapore boast better-developed healthcare systems than China —arguably some of the best in the world — a host of unique problems, from bungled quarantines to opaque religious sects, threaten to stymie local responses. How will they fare as the virus continues to spread?

Last week, Kentaro Iwata, a Japanese infectious disease expert, uploaded a video to YouTube. In the clip, Iwata explains that he has recently returned from epidemic control work on the quarantined Diamond Princess moored off the city of Yokohama, before savaging the Japanese government’s “completely chaotic” handling of the disease-stricken vessel.

Iwata’s comments made headlines in a country where academics rarely voice such outspoken criticism of the government. But his comments also resonated with many who see Japan’s response to the outbreak as inadequate. A poll carried out by the conservative-leaning Japanese newspaper Yomiuri Shimbun and subsequently reported by Bloomberg found that 52% of respondents were dissatisfied with the government’s handling of the outbreak.

Fears of an epidemic cut deep in a country where nearly 30% of people (link in Japanese) are above the age of 65, an age group particularly vulnerable to Covid-19. Growing case numbers, bureaucratic inertia, and bungled quarantines haven’t helped. On Saturday, Japanese Health Minister Katsunobu Kato admitted that officials had allowed a number of passengers on the Diamond Princess to leave the vessel without first undergoing mandated virus screenings.

Adding to the fraught atmosphere is the fact that Japan is gearing up to host the Olympic Games this summer. While Prime Minister Shinzo Abe’s government remains committed to the July 24 launch date, some organizers are warning that the world’s most prestigious sporting event might be moved, postponed, or even completely cancelled.

When cases linked to the Diamond Princess are discounted, Japan’s Covid-19 outbreak remains comparatively small. But the clusters of infections that have occurred in various locations around the country, from Hokkaido in the far north to Okinawa in the extreme south, have prompted officials to focus on preventing a sharp rise in infections and mitigate the potential impact on its healthcare system.

On Tuesday, the government released a strategy for containing the disease, advising companies to recommend their workers either telecommute or stagger their shifts, and telling people with cold- or fever-like symptoms to stay home.

Local-level organizations have taken their own measures, too. Hokkaido prefecture’s education board said Wednesday it will encourage local authorities to temporarily close the island’s 1,600 public elementary and junior-high schools following a number of student infections there, the Kyodo news agency reported. National soccer and rugby leagues have postponed matches through mid-March and pop groups have postponed concerts amid concerns about the spread of the virus, according to Kyodo.

Norio Ohmagari, director of the Disease Control and Prevention Center at the Tokyo-based National Center for Global Health and Medicine, told Caixin Global in an email that Japanese disease control experts are calling for people to refrain from large gatherings.

“One characteristic of this infectious disease is that it can cause group infections in places where people congregate. As this continues, it increases the burden on society. Therefore, we have to guard against mass outbreaks in both small and larger groups,” Ohmagari said.

“If a large outbreak were to occur, there is a possibility that even Japan’s medical institutions might not be able to cope,” he added. “For that reason, it is necessary to thoroughly contain the outbreak now, while it is still small.”

John Campbell, a professor emeritus at the University of Michigan and a leading expert on Japan’s health policy, told Caixin Global in an email that the country likely had the capacity to cope with a widespread Covid-19 outbreak.

Social and cultural factors may also shape a strong response to outbreaks, Campbell added. “Japanese people tend to be hypochondriacs and also tend to respect orders from above,” he said. “That should help.”

Daegu, a large commercial city in southeastern South Korea, is usually thronged with workers and shoppers. But since a Covid-19 outbreak exploded there last week, many of the city’s 2.4 million residents have stopped venturing outside.

The infections have focused attention on the Shincheonji, a secretive Christian sect whose founder has claimed to be the reincarnation of Jesus Christ. Shincheonji members, who reportedly number in the tens of thousands, are said to sit on the floor and sing for hours with their arms around each other’s shoulders, which could spread the virus further. One worshipper, a 61-year-old woman, is suspected of being a so-called super-spreader who may have passed the virus to large numbers of people in Daegu and the nearby town of Cheongdo.

In a move that recalled the dramatic lockdown of the 11 million-strong Chinese city of Wuhan, Daegu’s mayor last week ordered the closure of kindergartens and public libraries, while schools mulled postponing the start of term. Concerts and other events were postponed or cancelled.

But a closer inspection reveals a softer approach than the one taken in Wuhan. While authorities there have aggressively pursued home quarantines, temporarily shuttered businesses, and strictly controlled entry and exit to the city, Daegu officials have sought to keep the city running, allowing businesses to remain open while imploring citizens to take precautions and thoroughly testing for suspected cases, according to The New York Times.

If successful, Daegu may offer a feasible disease-control alternative in countries where Wuhan-style near-total lockdowns are unfeasible or unpopular.

Adam Kamradt-Scott, a health security expert at the University of Sydney, previously said that the fact that the infection has so far mainly spread among people linked to Shincheonji raised the likelihood that the cluster of cases “could conceivably be contained.”

For now, though, the situation remains touch-and-go. That’s largely because authorities are struggling to track hundreds of Shincheonji members who may have been infected, despite repeated calls to report their whereabouts. “I don’t care whether they are a cult or not,” one college student told The New York Times. “What makes me angry is that many church members have gone into hiding, rather than cooperating with the government.”

The densely-populated international business hub of Singapore could easily have become something of a petri dish for the fast-spreading virus. Instead, the 5.6 million-strong city state is probably the biggest success story of the epidemic so far.

Although Singapore’s health ministry has confirmed 91 Covid-19 cases, nobody in the country has yet died from the disease. Indeed, while other countries battle spikes in infections, Singapore is moving in the opposite direction: New infections are occurring at a rate of one or two per day, while recoveries are rising more quickly.

Experts attribute the country’s performance to its rapid and robust disease-control efforts. As the number of infections began to rise in late January and early February, officials moved quickly to identify, isolate, and test suspected cases, as well as to monitor and quarantine close contacts of infected people.

Crucially, experts say, Singaporean authorities were able to successfully rally local communities behind epidemic prevention work without implementing dramatic curbs on population movement or sparking undue panic. Those efforts have helped to check the spread of disease while minimizing strain on health services and the local economy.

“Singapore is not doing anything innovative. Its series of outbreak interventions are well established and the strength of Singapore is that it does these well,” said Dale Fisher, chair of the Global Outbreak Alert and Response Network. “There is strong leadership, coordination, and teamwork occurring at the highest level across ministries, as well as in healthcare institutions and the community.”

Many health experts see Singapore’s response to Covid-19 as the international benchmark, Fisher added. “I think it can be replicated by others. But it requires strong leadership, readiness to quickly undertake the above measures, and in particular community engagement to be a part of the solution.”