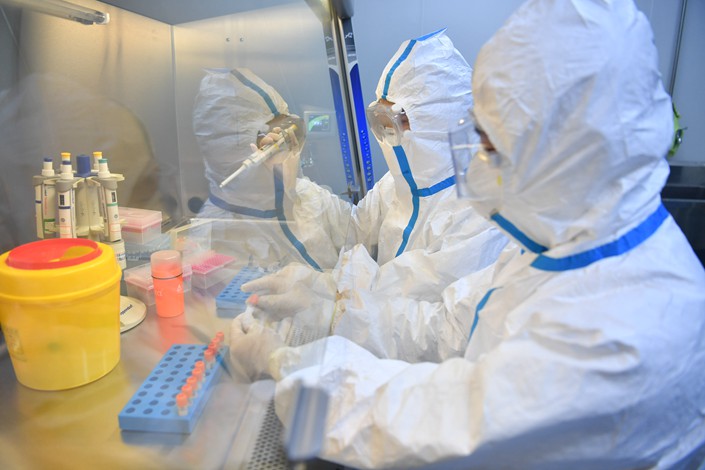 China's new Covid-19 diagnostic criteria include antibody tests to guard against false negatives that could be generated by existing testing procedures.

China is using antibody tests in a bid to strengthen diagnosis of the deadly new coronavirus following concerns that existing screening mechanisms were failing to catch large numbers of infections and leading to the premature discharge of patients.

It also follows a number of reports from provinces like Hubei, Hunan, Guangdong and Sichuan, as well as the municipality of Tianjin, in which patients have been “re-diagnosed” with Covid-19 after testing negative for the disease and being released from hospital. Those cases have drawn calls for more rigorous discharge requirements.

Doctors in China have mostly been relying on nucleic acid tests (NATs) to diagnose Covid-19. That involves taking swabs from patients and testing them for specific types of molecules present in the genetic material of the new coronavirus. If those molecules appear in the sample, doctors isolate the patient for treatment.

However, problems with NATs have stoked concerns that Covid-19 cases are going undiagnosed. Last month, Wang Chen, a critical diseases expert and director of the Chinese Academy of Medical Sciences, told state broadcaster CCTV that “not all of those infected by (the virus) return positive NATs.”

Although other public health experts later downplayed Wang’s comments, NATs are by nature an imperfect testing mechanism. For instance, samples taken from parts of the respiratory tract where the virus is not present in large numbers may return false negatives. Similarly, samples contaminated by other types of genetic material may distort the test results.

John Nicholls, a clinical professor in pathology at the University of Hong Kong, previously told Caixin that taking samples from too high in the patient’s throat could be part of the problem.

“There is increasing evidence that the virus is not as abundant as influenza in the upper respiratory tract and so if a sample is taken from this area rather than lower down in the respiratory tract it will lead to a false negative,” Nicholls said.

In addition to NATs, doctors in China have been confirming some Covid-19 cases via genetic sequencing, but the technique is expensive and not all hospitals have the facilities to conduct it.

That’s where antibody tests come in. Infectious diseases are caused by pathogens, of which viruses are one kind. When pathogens infect the human body they typically stimulate an immune response, producing specific chains of proteins known as antibodies that bind to and neutralize them.

Antibodies circulate in the bloodstream for some time after the patient has cleared the virus from their system and recovered. Their presence can tell doctors the patient had the disease even once they stop showing symptoms — if they displayed them in the first place.

“Antibody tests can be particularly useful when diagnosing patients who have previously returned negative NATs, when examining cases of ‘reinfection’ after patients have left hospital, and when basic-level (medical work) temporarily lacks the ability to conduct NATs,” said Shen Yinzhong, director of immunology at the Shanghai Public Health Clinical Center.

The new diagnostic criteria refer to two antibodies known as immunoglobulin G, or IgG, and a similar molecule called IgM. Although both are produced naturally, the former is commonly present in blood serum while the latter appears in the presence of recent or severe viral infections.

The new guidelines permit doctors to confirm a Covid-19 diagnosis if the patient’s blood tests positive for both IgG and IgM, if a negative IgG test turns positive, or if IgG levels are four times higher during the recovery period than during the acute stage of the disease.

Shen said high IgM levels usually indicate a recent infection, while elevated IgG levels suggest the patient has entered the recovery stage or has completely recovered. “No matter how you cut it, if you find antibodies it proves there’s been an infection,” Shen said.

The latest diagnostic criteria are the seventh iteration of the guidelines since the Covid-19 epidemic erupted in China in December.

Besides antibody tests, the new criteria also recommend the use of blood serum tests as a diagnostic tool. Blood serum is the straw-colored fluid that remains once all the clot-forming cells are removed, and can be screened for the presence of pathogens and other molecules.

Doctors hope that continuously revising the diagnostic criteria will help keep the virus under control as the outbreak enters a crucial new phase. But previous changes have caused controversy about statistical continuity, with a decision to allow clinic diagnosis alongside lab tests in Hubei in the fifth round of the guidelines fueling a one-day jump of nearly 15,000 new confirmed cases on Feb. 13. Those changes were reversed in the sixth round of guidelines, sparking skepticism about the dramatic slowing of new case growth that followed.

Although China has reported a sustained decline in new Covid-19 cases and is gradually loosening dramatic restrictions on movement, it faces an emerging threat from infected people arriving in the country from overseas.

By the early hours of Wednesday morning, Chinese customs authorities had confirmed 75 recent arrivals who had returned positive NATs for the new coronavirus. Beijing and Shanghai had both logged such “imported” cases.

A further 779 people are suspected of having brought the new coronavirus back into China from abroad, according to customs authorities.

As of late Wednesday, more than 13,000 people outside China had been diagnosed with Covid-19. South Korea, Iran, Italy and Japan have been hardest hit.