By Xiao Hui and Isabelle Li 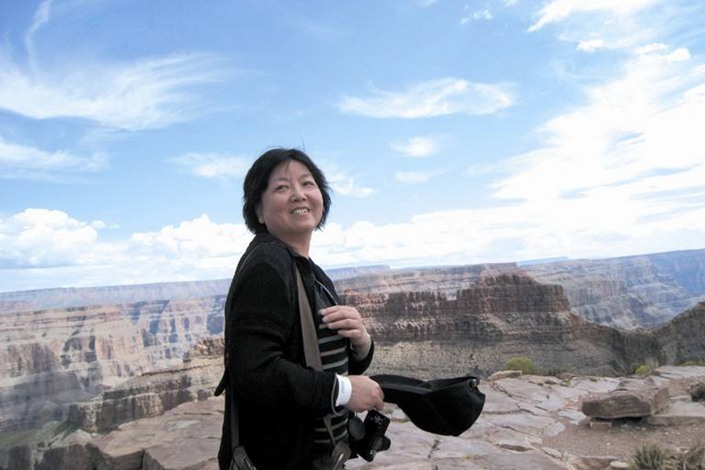 (Wuhan) ⁠— Shortly after midnight on March 25, novelist-turned-celebrity blogger Fang Fang published the final episode of her Wuhan lockdown diary, called a “battlefield diary” by some. The 64-year-old has been a writer most of her career, but never expected to become one of the nation’s most-read bloggers in late January, when she started writing a diary from the epicenter of an outbreak that would go on to become a pandemic.

Between Jan. 25, the first day of the Chinese New Year, and March 24, the day Wuhan announced its lockdown would end on April 8, Fang Fang published an online diary for 60 days, expressing her views on the unprecedented public disaster that began in her adopted hometown in Central China. Her posts (link in Chinese) were published in Caixin’s blog section. In the final installment, read by millions, she quoted a Biblical verse: “I have fought the good fight; I have finished the race; I have kept the faith.”

In an email interview with Caixin on completion of her personal narrative, Fang Fang voiced her opinions on the outbreak, what it was like to live through the lockdown, and the long-term effects the city may suffer.

The interview has been edited for length and clarity.

On the coronavirus outbreak:

Caixin: When did you first hear about the outbreak in Wuhan?

Fang Fang: The first time I heard was on Dec. 31. It was my eldest brother who learned of it. We have a small chat group of four: me and my three older brothers. At 10 a.m. on Dec. 31, my eldest brother forwarded an article to the group saying a “pneumonia of unknown cause seems to have appeared in Wuhan,” and it was noted in relation to SARS. My brother said he wasn’t clear on whether the information was true, but my second brother immediately reminded everyone not to go outside. Later, my eldest brother sent a message again to confirm that the news was true, and he said experts from the National Health Commission had arrived in Wuhan.

My third brother lived near the South China Seafood Market where the epidemic initially broke out. Soon I saw videos of the situation at the South China Seafood Market and the nearby Central Hospital that circulated in my Wuhan University alumni group, which I immediately forwarded to my family members. I reminded my third brother to wear a mask when he walked outside, and even suggested that he move to my house after New Year’s Day.

On the morning of Jan. 1, my eldest brother sent an article from the Wuhan Evening News about the closure of the South China Seafood Market to the group. As ordinary people, we paid great attention to the matter on that day. The measures we took were the same as now: wearing a mask, staying at home, and not going out.

When did you realize the situation was getting serious?

It was around mid-January, when there had been quite a lot of rumors. At that time, I didn't think about how serious the situation was, but I heard the disease was contagious, and many people were infected. I have been wearing a mask since Jan. 18.

When you heard the lockdown news on Jan. 23, what were you thinking? Did you think about leaving? What do you think of the people who left Wuhan on the day of lockdown?

I should be one of the people who read about the news earliest, because I went to pick up my daughter at the airport on the evening of Jan. 22, and it was already around 1 a.m. on Jan. 23 when I got home, so I saw the message soon after I turned on my phone. The idea of leaving didn’t occur to me at all, but I certainly didn’t expect the situation would become as serious as it did.

I can understand those who left right before the official lockdown of the city in the morning of 23th. It was human instinct to flee. Those who scolded them would probably be the first batch to flee if they themselves were in Wuhan at that time.

What was the biggest change the lockdown made in your personal life?

What the lockdown changed was people’s minds. Seeing how devastating it has been to Wuhan residents made us very angry and very sad. I don’t know whether those who passed away will have died in vain after the epidemic is over. I’m very worried those who are still alive will end up ignoring why the dead died.

The saddest thing was the death, for sure. The death of your acquaintances, your schoolmates. And knowing the despair of people who were seeking medical treatment even though you could not offer help was really sad, too. What made me most furious was the delay of nearly 20 days in the outbreak’s early stages that caused such a serious and chaotic situation later on — it was a man-made catastrophe. The most touching thing, of course, was the fearlessness of medical workers, and also the endurance of the people of Wuhan and their deep affection for ordinary people like Li Wenliang (a whistleblower doctor who later died from the disease).

On her epidemic diary:

Your diary has become a window for the outside world to understand the situation in Wuhan. Some people outside Wuhan said they read your diary first thing every morning. Were you surprised? Why do you think it got so much attention?

I was more than surprised — it was completely unexpected. I wasn’t reading other people’s reports, and don't know how different mine was from theirs.

What made you start writing the epidemic diary?

There was no special reason except that the editor-in-chief of Harvest magazine invited me. I was in a bad mood at the beginning and didn’t feel like writing. But later on I changed my mind and thought maybe I should keep a record.

Many people think of your diaries as “battlefield diaries.” You mentioned things about frontline rescue efforts and the epidemic’s development. But a lot of the information came from friends and relatives, as you were not really at the frontline. How did you select information to put in your diary?

It would be a mistake to see it as a battlefield diary. It is just the diary of a victim. I am one of the victims in Wuhan. I didn’t have any criteria; I just wrote down what I thought. Material was everywhere on the immense internet. It was an individual record, and the focus was more on my personal experience and perspective, so it was quite different from news reports. Life is made up of small matters, and so is a personal diary.

In your diary there is some criticism of how the early stage of the outbreak was handled. Weren’t you afraid of annoying some of the authorities? On the other hand, you also mentioned the difficulties faced by some officials, and some netizens took it as if you were defending them. How did you receive such criticism?

Why would it be my business if anyone was unhappy? I was locked at home for so many days, and there are 9 million people in Wuhan who couldn’t walk out of their doors, 5 million who couldn’t go home, and many more ordinary people who were suffering. The authorities should be concerned about whether those people were happy.

Some netizens were criticizing officials for small matters, such as using the wrong words. I think this kind of detail is not important and can be let go when we are fighting the virus at full force. What we have to look into is the bigger issue, that is, whether the officials overseeing the city were doing their job in protecting the people’s welfare, because they were suffering so much.

How do you think the coronavirus epidemic will change the mentality of people in Wuhan? When the disaster is over, how will they heal?

The trauma suffered by people in Wuhan is huge, for sure. Many people who sought medical treatment experienced the misery of crying out for help but receiving none, which I believe made them deeply hopeless. Those who died are gone, but their loved ones are still around, and they all experienced moments of great despair.

Leaving aside the most traumatized people, the fact that 9 million Wuhan citizens have been trapped for more than 60 days is a type of internal injury. There has been depression, anxiety, and agitation. After the lockdown is lifted, there might be more complicated feelings. For instance, kids might not dare go outside, and adults might not dare talk to each other at close distance. Fear of the virus may remain for a long time, too.