By Shen Fan and Timmy Shen 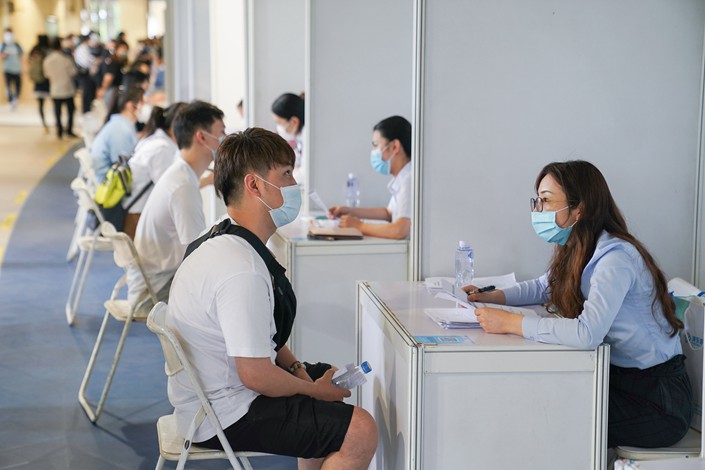 “China is facing great employment pressure in 2020 and it may be not easy to fill the holes in employment,” Ding said.

The impact of the coronavirus pandemic on employment in China may last for two years, with “high-touch” service industries, manufacturing and small and midsized companies particularly affected, experts say.

China’s employment situation was weak last year and has worsened further due to Covid-19, Ding Shouhai, professor at Renmin University of China’s School of Applied Economics, said at an online forum Tuesday.

Official data show that the job market has come under high pressure in recent months, indicating that the economy is far from fully recovered, even as the number of daily new cases of coronavirus in the world’s most populous country has fallen to a handful. In May, the surveyed urban unemployment rate in 31 large cities rose to 5.9%, the highest since the data series began in June 2013, according to National Bureau of Statistics (NBS) figures compiled by data provider CEIC. The country’s national surveyed urban unemployment rate remained elevated, despite slipping to 5.9% in May from 6% the previous month.

The situation of employees on furlough, a state in which people are employed but paid less or on unpaid leave, remains an issue. In March, about 18.3% of employees (link in Chinese) in urban areas were put on furlough, according to NBS data. This was down to 3.5% in April and 1.2% in May (link in Chinese), but the May number was still “higher than the levels in the past,” according to the NBS. The government rarely disclosed relevant data until this year.

“China is facing great employment pressure in 2020 and it may be not easy to fill the holes in employment,” Ding said. The country’s economic growth would need to stay at about 4.5% to meet all the existing employment needs, which is rather difficult given the current economic situation, according to Ding. The International Monetary Fund has forecast China’s GDP would grow by 1% this year, down from a previous projection of 1.2%.

“Even though the epidemic could be contained within a year, the pressure on employment might stay for two years,” Ding said.

Among those who struggled amid the fallout of the pandemic, about 80 million people in high-touch service industries, such as hospitality, catering, residential services, culture and tourism, might have been the most affected, according to Ding’s estimates. Such high-touch service industries, which involve a high level of interpersonal contact with customers, account for over 20% of services sector employment, according to Ding.

“Manufacturers remained cautious about increasing hiring,” said Wang Zhe, a senior economist at Caixin Insight Group, commenting on the survey. “Some companies still had layoffs planned and were in no hurry to hire new workers to fill vacancies.”

Ding said that migrant workers and fresh college graduates are also struggling. He said that in some areas, migrant workers had been returning to their rural homes in the past two months and they were not included in the official urban unemployment rate.

There will be about 8.74 million college graduates this year according to an official estimate, 1 million of whom might continue studies with the remainder trying to enter the workforce, Ding said.

Safeguarding employment was listed as one of the focuses in this year’s government work report. Most of the efforts to safeguard employment are aimed at micro, small and midsize businesses that employ the majority of China’s workforce.

China’s central bank and Ministry of Finance have set up a special purpose vehicle to channel as much as 440 billion yuan ($62.3 billion) of funds to regional banks so that they can provide new loans or roll over maturing loans to small businesses, especially those impacted by the pandemic.

“We need to step up policy support to protect enterprises and employment and stabilize economic growth, because the impact of this epidemic on the economy and society has been more intense than most people expected, and it may take far longer and be more difficult than originally anticipated for market entities to resume production and for economic growth to stabilize,” Pan Gongsheng, a deputy governor of the People’s Bank of China, said in June.